The ultimate travel experiences in the new urban marvel 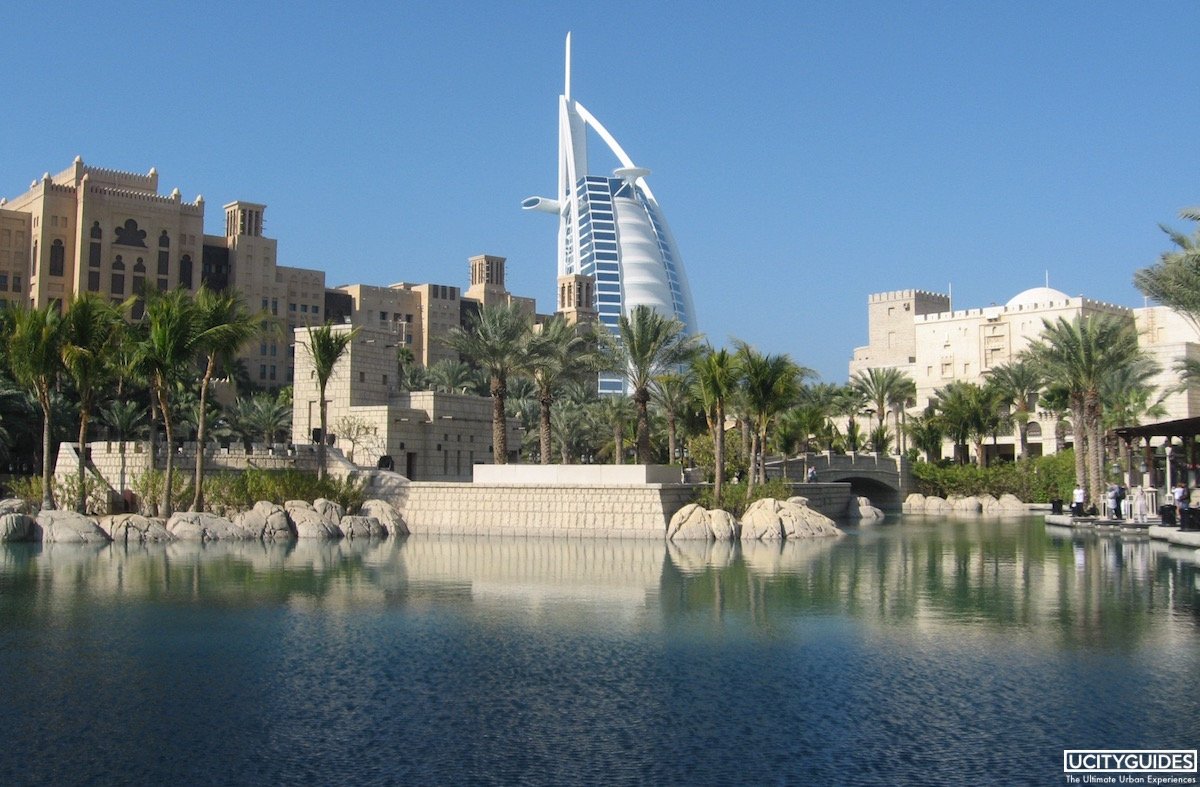 
Dubai attracts rich pockets and poor taste as a place where everything must be big to be relevant. It's worked hard to have the world's tallest building, the most luxurious hotel, the largest shopping mall... It's something of a Middle Eastern Las Vegas, and that's what makes it so captivating to so many people. It's a sprawling city that's half resort half building site, on its way to becoming a major global hub and urban marvel.
South Asians make up more than half of the population, while Emiratis are only about 10% of the total. Everyone else comes from everywhere else, and you're more likely to hear English and other languages on the street than Arabic.
Except for accommodation, the city isn't as expensive as you'd imagine (the most reasonably-priced hotels are clustered in the older Deira and Bur Dubai districts) and it hopes to attract 15 million visitors per year. Once the gaudy, the opulent and the excess settle, it will be the splendid cityscape views, the beaches and poolside terraces that will keep them coming in the future. As a major city rising from almost nothing, Dubai offers visitors the chance to witness history in the making, marveling at the new and the newer.

What to See and Do in Dubai

Decide what you really want to see in Dubai based on your interests -- whether that's skyscrapers, architecture, beach, street life or simply snapping a few photos by the tallest of the tall buildings. We highlight the best attractions in different categories and, to help you plan, link you to their location on Google Maps () or to their official website (). 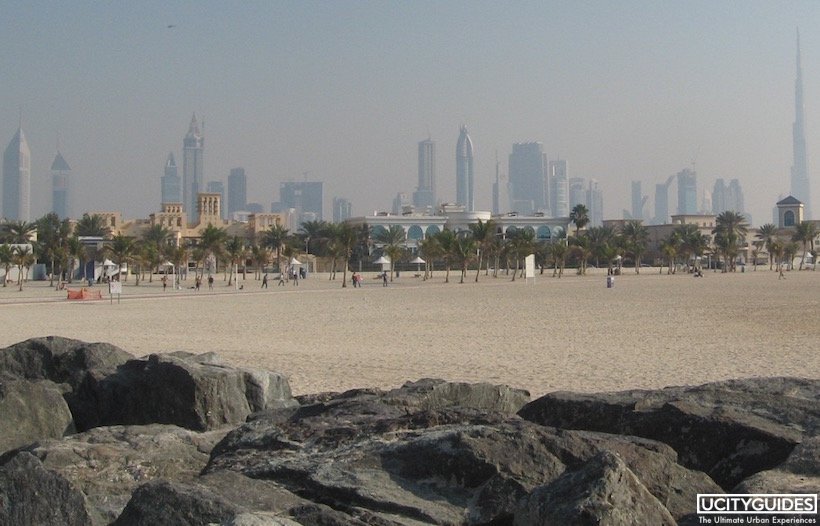 The Burj Khalifa standing out in the Dubai skyline - ©UCityGuides.com


Burj Khalifa was completed in 2010 as the world's tallest tower. A dozen of its floors are the Armani Hotel, while an elevator takes you to an observation deck on the 124th floor in just 60 seconds.
Before Burj Khalifa there were the Jumeirah Emirates Towers, the tallest buildings in the city for nine years. One a hotel and the other an office building, together they remain one of Dubai's beloved landmarks.
The most iconic of all, however, its the Burj Al Arab, which did everything to become the most eye-popping hotel on the planet. A close second is the Atlantis The Palm, standing on the famous man-made palm-shaped island. 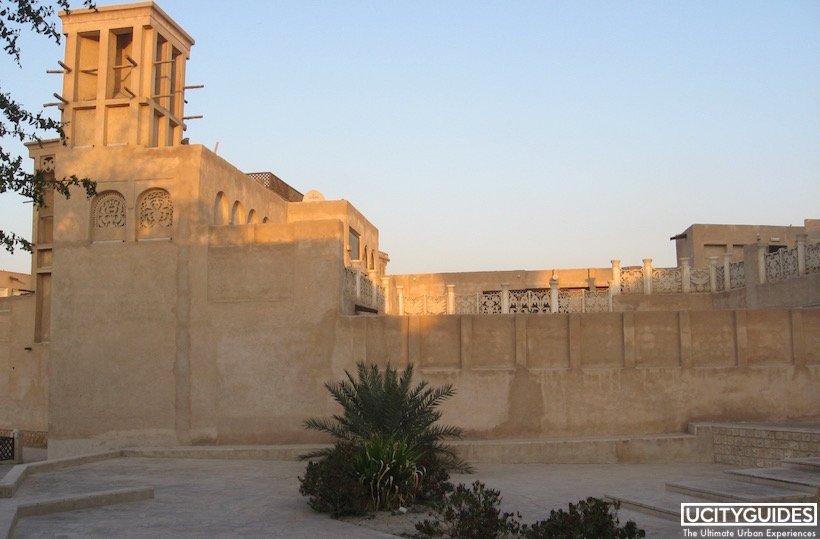 
The only thing in town that can be described as "old" is the Dubai Museum, where visitors can get a sense of the fishing village that Dubai used to be before the oil. Not very far is Al Fahidi Historical Neighbourhood, the other remaining pocket of the original city. It's a "living museum" focusing on Dubai's maritime past, providing insight into local life, and often with the presence of craftspeople.
Closer to the beaches is the Jumeirah Mosque, not old but following a classic mosque architectural style. It's open even to non-Muslim visitors, having become a popular attraction.

Dubai wants to become the contemporary art capital of the Gulf, and for that check out the galleries at the industrial district of Al Quoz, where former warehouses are now dedicated to art by international and regional artists. 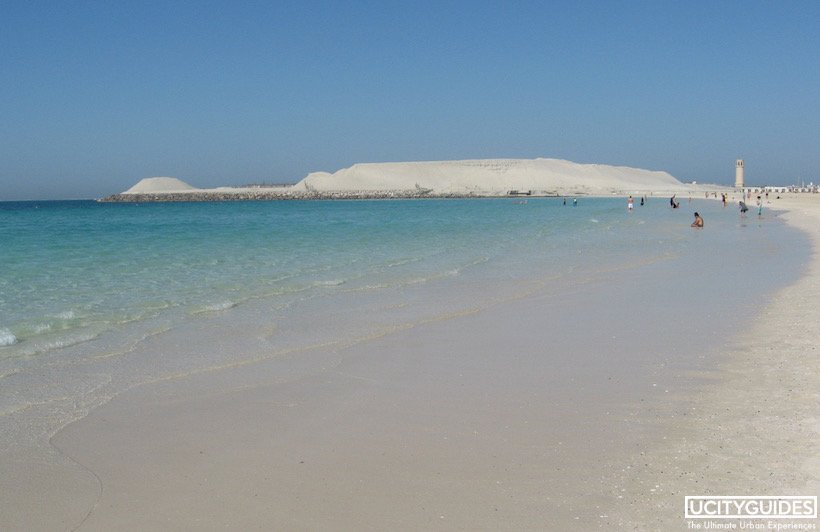 
For most tourists, the beach is one of the city's top attractions. Although private developments have taken over much of the sand, there are still plenty of public beaches. Sunset Beach near the Burj Al Arab and Jumeirah Beach by the Dubai Marina are public areas. Just remember to cover up when you leave the sand, as wearing a bikini outside the beachfront can get you in trouble. 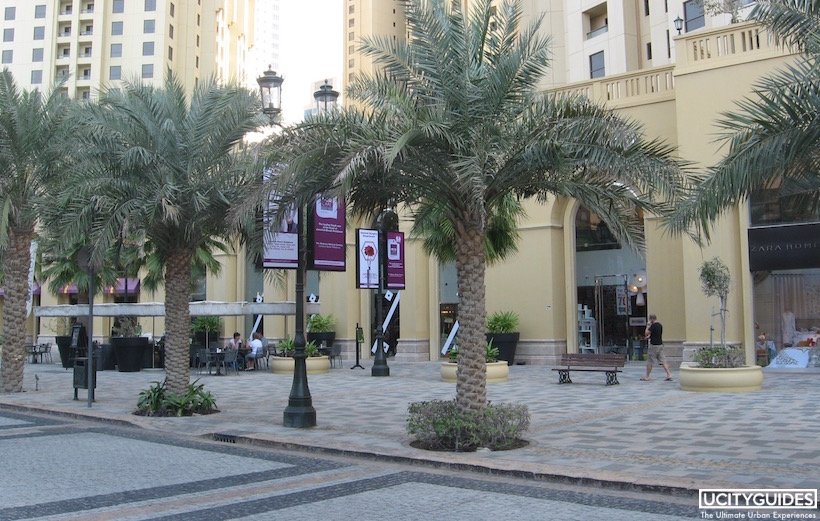 "The Walk" on the Jumeirah beachfront (JBR Marina Beach) - ©UCityGuides.com


Deira and neighboring Bur Dubai are as close as you get to old historic districts. They're also the best pedestrian areas, with souks, water taxis crossing the creek, and ethnic eateries.
Nearby, the beachfront district of Jumeirah is the most pleasant area in the city, with cafés, boutiques and villas. It's also the most cosmopolitan, for those who can afford it.
Naturally, one of the world's largest man-made marinas had to be in Dubai, and it has to be surrounded by towers. The most interesting is the twisting Cayan Tower (previously known as the "Infinity Tower"), and down Marina Walk (which runs the entire length of the marina) is where you can admire all the surrounding architecture in the company of joggers and cyclists. 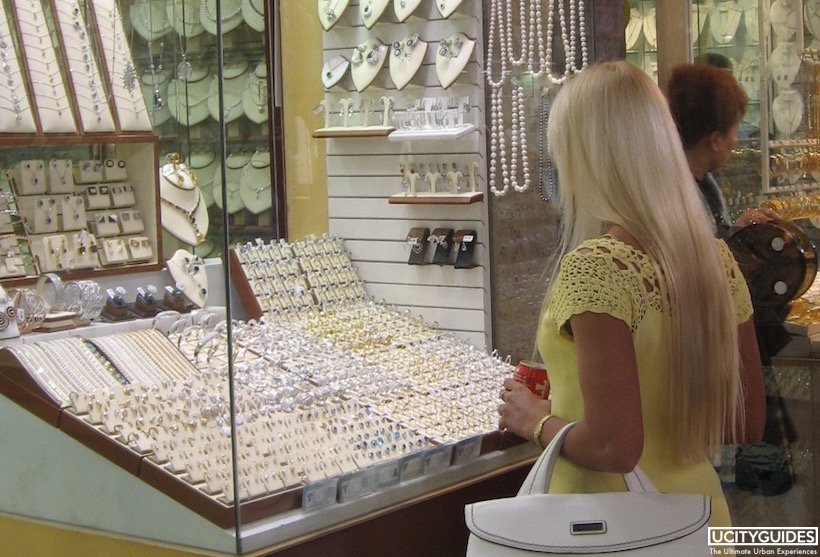 
Dubai is a tax-free shopping paradise, but the scorching-high temperatures outside mean that most of the stores are found in malls. And those malls are predictably huge (Dubai Mall is the largest in the world), although they mostly appeal to other Middle Easterners and Asians and less to Westerners who already know most of the shops from their own hometowns. In addition to shopping, these mega-malls also offer some rather tacky experiences like indoor ski (at the Mall of the Emirates) and major attractions (the aquarium at the Dubai Mall).
The most fun shopping may therefore be found at the souks, mostly for their atmosphere. Look for the Spice Souk, which is nothing more than a few shops down one street but offers pleasant smells and atmosphere. Nearby, past souvenir stalls, is the Gold Souk with fixed prices based on workmanship and the daily price of gold per gram.
The best time for a shopping spree is January, during the Dubai Shopping Festival, under milder temperatures. 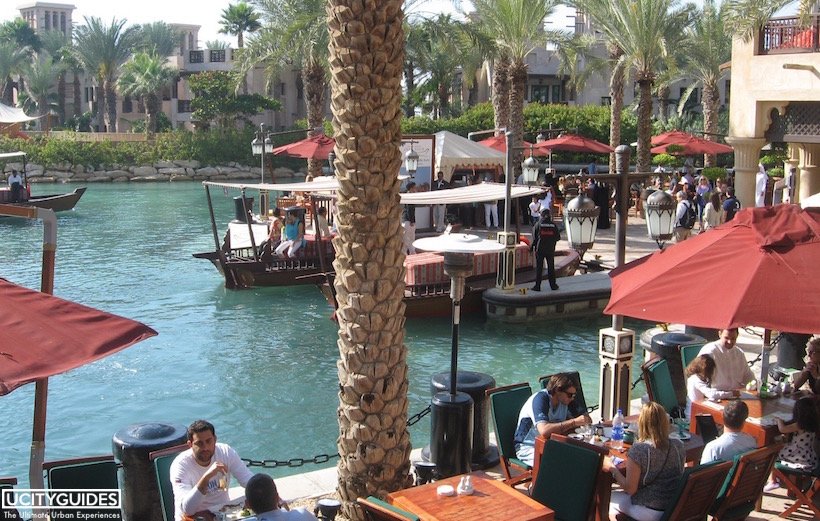 Eating and drinking at the Madinat Jumeirah Souk - ©UCityGuides.com


For the most authentic and inexpensive places to eat, head to the Creek and Deira areas, whose narrow streets are lined with ethnic restaurants. Downtown and Jumeirah Beach Road have good cafés, while the best restaurants (and bars and clubs) are found in 5-star hotels. Those are the best-designed spaces and cater to Western crowds for being among the few spots where alcohol is served. If you're looking for high-end dining, you'll be glad to know that Michelin-star chefs have opened restaurants here to appeal to a more discerning clientele.
A particularly attractive destination for eating and drinking is the Madinat Jumeirah souk, with views of the Burj Al Arab. Designed like a traditional Arabian town, it houses dozens of restaurants, from casual and reasonably-priced, to expensive fine dining, many facing a courtyard.
By the marina, along the beach, is the kilometer-long "The Walk," a strip of alfresco restaurants and cafés, and also one of the best places in town for people-watching.

Enjoy reduced admission at many of the top attractions and dinner cruises, and get a complimentary guidebook and map:

Hop on a sightseeing bus, join a walking tour, go on a cruise, on a helicopter tour over the skyscrapers, or on a day trip: