The ultimate travel experiences in the birthplace of Western culture

View over Monastiraki Square and the Acropolis - ©UCityGuides.com


Athens used to be a one-night stand to experience the Acropolis before heading out to one of the Greek islands, but those who still do that today are missing a capital that is increasingly more of a global city, more stylish, and more cosmopolitan. While "pretty" would be the last word used to describe most of the city and its concrete apartment blocks, stepping into the pedestrian streets in the Plaka district below the Acropolis reveals an attractive, charming, more relaxed city, and a thriving outdoor culture.
Outdoor cafés and restaurants are packed, and seaside clubs are filled with enthusiastic young crowds, all enjoying the year-round sun and mild nights. Traditional tavernas remain excellent dining choices, but modern restaurants serving contemporary interpretations of Mediterranean cuisine now compete as top gastronomic experiences.
While you'll come for the history, the myths, and the legends, it is Athens' post-2004 Olympics spruced-up modern face and vibrant life that will make you stay just a little longer before hopping on a ferry to Greek island bliss.

What to See and Do in Athens

Decide what you really want to see in Athens based on your interests -- whether that's art, architecture, street life or simply snapping a few photos by the main landmarks. We highlight the best attractions in different categories and, to help you plan, link you to their location on Google Maps () or to their official website or tour options ().

The Acropolis is the most important ancient site of the Western world, with the Parthenon overlooking all of Athens below it. That's the largest Doric temple ever built in Greece, created in 447 BC as the home of the great statue of Athena. Next to it stands the Erechtheion, the supreme example of Ionic architecture. It served as a temple dedicated to Athena and Poseidon, and is instantly recognized due to its much-photographed columns of female figures.


Found at the southern base of the Acropolis, the Acropolis Museum incorporates ruins found during its construction. Partially opened in 2008 and fully accessible in early 2009, it houses the fascinating archaeological treasures of the Acropolis.
You should also not miss the National Archaeological Museum, one of the world's greatest museums. It houses most of the important finds from ancient Greece, including a huge bronze statue from 460 BC depicting Zeus or Poseidon (no one knows which), and superb prehistoric and bronze collections.
Other national treasures are found in the National Art Gallery. In addition to centuries-old Greek art it also includes European masters and contemporary works from the country's leading artists.
The Benaki Museum is also worth a look, a fine private collection containing art from around Europe and Asia. Among the highlights are Bronze Age and Egyptian treasures, together with Greek regional costumes.
Also outstanding is the Byzantine Museum, with its collection of Christian art from the 4th to the 15th centuries, including rare scriptures, paintings, pottery, and manuscripts.

The Temple of Olympian Zeus is the largest temple in Greece, begun in the 6th century BC. It originally featured a colossal statue of Zeus and had 104 Corinthian columns, of which only 15 remain standing.

The OAKA Athens Olympic Sports Complex is the city's most recent landmark, a massive stadium designed by Santiago Calatrava where the 2004 Olympics took place. You can visit it on an organized tour to better appreciate its futuristic design. 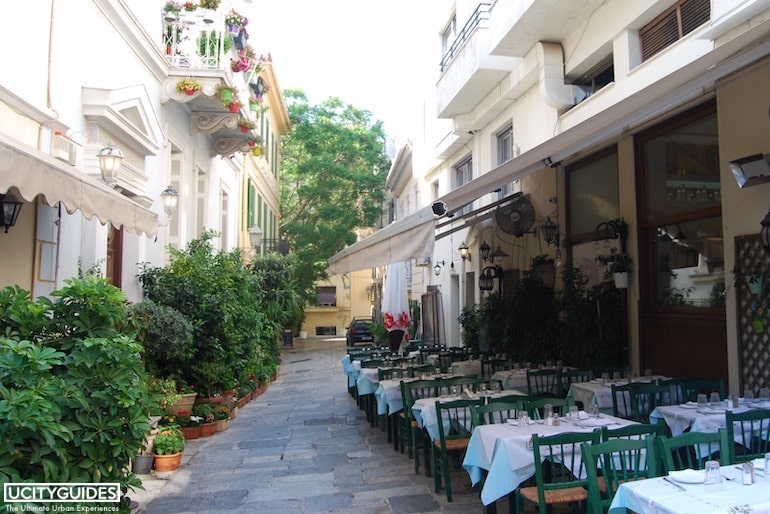 
Most Athenians and tourists do their shopping down the pedestrian Ermou Street, while at night they move on to the trendy bars of Psyri. Others prefer to go by the sea, and choose the suburb of Glyfadas.
If you rather enjoy the city life, walk from Syntagma Square (overlooked by the Parliament Building) down Stadhiou Street to Omonia Square, from where you then go down Athinas Street to visit the city's central market. It also leads to Kotzia Square overlooked by the neoclassical Town Hall, and Monastiraki Square, welcoming you to the oldest part of the city. That's where you'll find the most touristy shops and restaurants, especially in picturesque Plaka, a mostly pedestrianized neighborhood.

Athens' major shopping areas are Kolonaki (with Stadhiou, Voukourestiou, and Anagnostopoulou as the streets with the biggest concentration of major labels) and the pedestrianized Ermou Street with all of the mainstream chain stores for clothing and footwear. Also worth a browse is the popular Monastiraki Flea Market, the place for antiques, collectibles, and clothes, while for more upscale shopping, the Attica department store is the place to go.

Coffee is more expensive in Athens that in anywhere else in Europe, maybe because people just sit at cafés to have coffee for hours and that's how the space they're taking is paid. A café is also used for people-watching and meeting friends, and with such good weather most of the time, many sit at tables outside. When it's time for a fuller meal, a traditional taverna is still the choice for many. You should try one too, although there are now modern versions with reinvented classic dishes and contemporary décor.
All other restaurants are diversifying the city's dining choices, with new ethnic menus and innovative chefs. While most tourists end up eating in the atmospheric Plaka district, in most cases the restaurants there are touristy and ordinary. Instead, choose one of the increasingly sophisticated choices elsewhere. 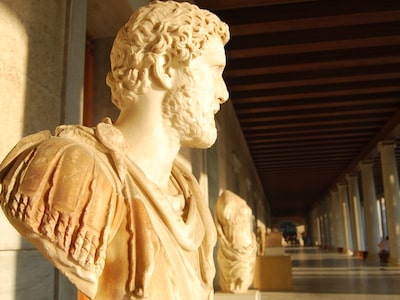