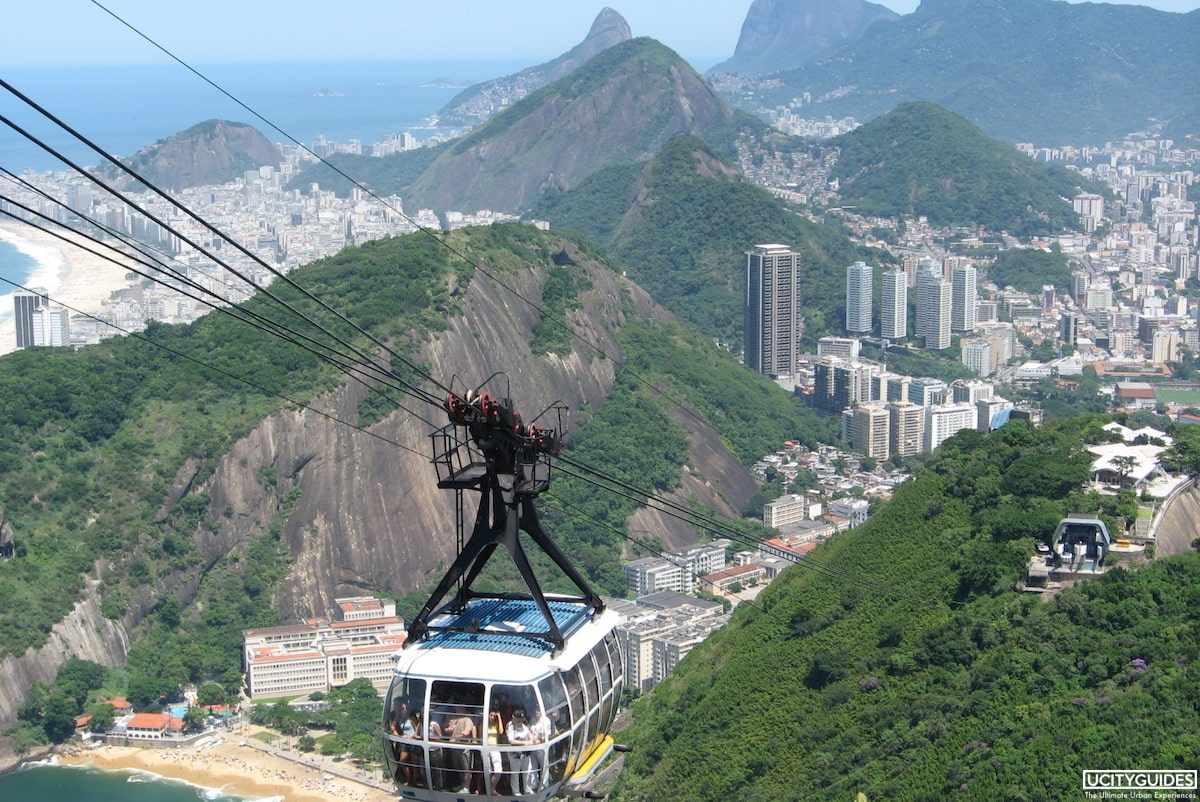 View over Rio, from the cable car to the Sugar Loaf mountain - ©UCityGuides.com


Rio is too busy at the beach to compete with São Paulo or Buenos Aires as Latin America's most stylish and dynamic metropolis. And who can blame it? After all, this is the city of tanned beauties living between lush mountains and golden beaches, so beauty and sensuality wins over urban sophistication.
It is also stunningly beautiful when seen from the top of the famous Corcovado statue or of the Sugar Loaf mountain. Its matchless location earned it the name of "the marvellous city" and you'll agree as you lie in Copacabana or Ipanema beaches gazing at the surrounding hills and mountains -- that is, if you're not too distracted by the flawless bodies sunbathing or playing volleyball.
The smart Leblon neighborhood offers fashionable boutiques and restaurants, and in Ipanema you'll find the swankiest bars and shops. Then there's the colonial charm in its oldest districts (from the architecture of downtown to the Lisbon-like pavements), and the more bohemian Lapa and Santa Teresa neighborhoods.
So pack your Havaianas and your sexiest beachwear, and whether you'll be heading to the beach, to a colorful dance venue, or crossing over to Niteroi's contemporary art museum, you'll always be surrounded by an irresistible and constant motion in Rio.

What to See and Do in Rio de Janeiro

Decide what you really want to see in Rio de Janeiro based on your interests -- whether that's art, architecture, street life or simply snapping a few photos by the main landmarks. We highlight the best attractions in different categories and, to help you plan, link you to their location on Google Maps () or to their official website or tour options (). 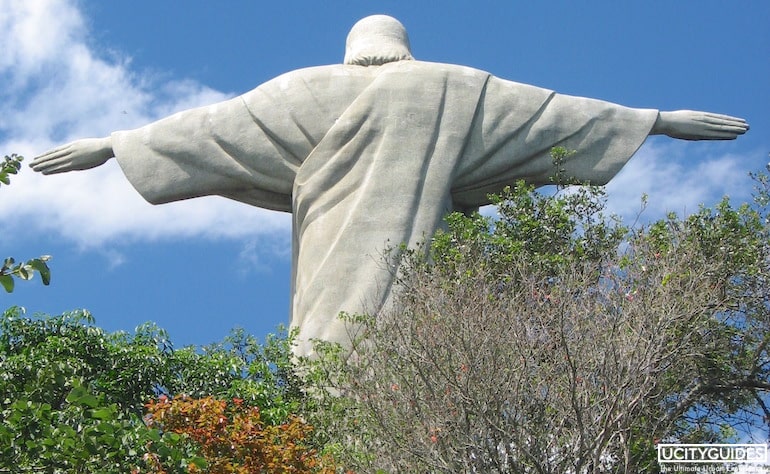 The iconic statue of Christ the Redeemer - ©UCityGuides.com


The Corcovado is one of the world's best-known monuments, an art deco statue of Christ overlooking the city from the top of a mountain since 1931. The views from there are breathtaking, as they are from the Sugar Loaf, said to be the second most famous mountain in the world. It is from these vantage points that you'll come to the conclusion that you're standing above one of the world's most beautiful cities.

The Niteroi Contemporary Art Museum is housed in a building designed by Oscar Niemeyer in 1996, looking very much like a spaceship. It hosts temporary contemporary art exhibitions mainly of Brazilian aritists, although some say the best work on display is the building itself.
The Modern Art Museum dates from the 1950s and presents the best of modern Brazilian and Latin American art, as well as major international exhibits (Tickets: Modern Art Museum).

European art left behind by the Portuguese royal family can be seen together with more recent Brazilian and African art at the National Museum of Fine Arts, established in 1937.

The massive Metropolitan Cathedral stands out from the skyscrapers in the downtown ("Centro") district. As a tall concrete cone, it may not be the most beautiful cathedral from outside, but once you step inside you'll be impressed by the stained glass windows and the overall space, able to hold up to 20,000 people. 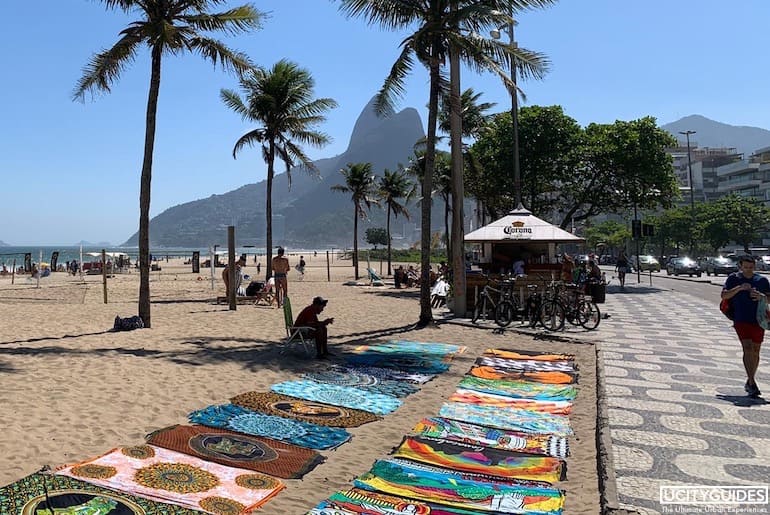 Life in Rio is spent at the beach - ©UCityGuides.com

Copacabana is the world's most famous beach, and you can sit on its white sand to admire its lush surroundings. Because it has become such a tourist trap, it's a better idea to choose Ipanema instead when you want to experience the city's beach life. It's the place to see and be seen at, with some of the city's best bars and shops, especially down Rua Garcia D'Avila. It's just a short walk to Leblon from there, the most sophisticated neighborhood in Rio. Its Rua Dias Ferreira is the most fashionable street in the city, home to many of its top restaurants. You'll also want to take a trip to Centro (downtown) if you wish to hop on the ferry to the contemporary art museum in Niteroi (see above). While you're in the neighborhood, you'll come across old colonial architecture mixed with ultramodern architecture, together with the city's huge cathedral (see above). Back by the waterfront, Lagoa Rodrigo de Freitas is a stunning saltwater lagoon with mountains and the Corcovado as the backdrop. It's the chosen spot for jogging or cycling at any time of the day. At night, Lapa and Santa Teresa are the bohemian quarters for samba dancing.

Brazil's shopping capital may be São Paulo, but it was Rio that defined the Brazilian style. And don't think that simply means thongs and Havaianas. There are sporty fashions and, yes, the world's sexiest bikinis.
For the international luxury brands head to Ipanema's Rua Garcia D'Avila. Other major shopping streets where you'll likely find everything you're looking for are Avenida Ataúlfo de Paiva in Leblon and Rua Visconde de Pirajá in Ipanema.
For everything under one roof, visit the Fashion Mall in the São Conrado district.

The best way to start the day or to refresh after a day at the beach is with a freshly-squeezed juice. You're in a country blessed with an endless variety of fruits, so take advantage of Rio's cafés which will offer you everything from açaí to coconut juices.
For dinner, head to Rua Dias Ferreira in the Leblon neighborhood for the city's hottest restaurants, and also check out the streets of Ipanema for some local and international gastronomic highlights.