The ultimate travel experiences in Paris 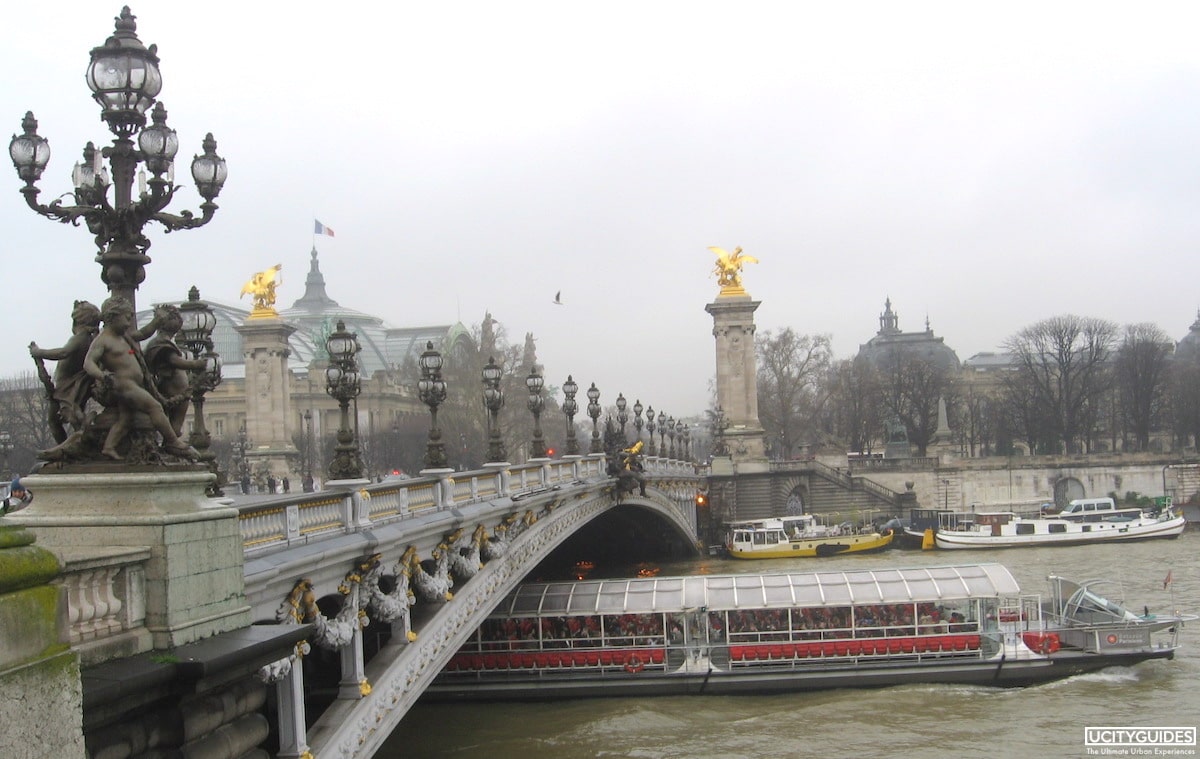 
The French mastered the art of living, and their capital showcases it with the utmost sophistication. While the Louvre may be the world's unparalleled museum and the Eiffel Tower one of the most recognized landmarks, what has made Paris the world's most visited city is precisely that French art de vivre. The real draw is the city itself, its elegant boulevards, charming cafés and markets, glamorous boutiques, fine dining, the Seine, romantic visions, and of course, the art.
Paris is pure hedonism, which is why becoming a flâneur is as important during a visit to the city as seeing any particular sight. Sit at a café or bistro for a café crème and croissant, window-shop, grab a baguette at a market, have an aperitif before dinner, and indulge in haute cuisine.
Paris is in many ways the perfect city, so who can blame it for seeming self-absorbed, self-important, perhaps even narcissistic? While many outside visitors often diagnose its confidence as a superiority complex, Paris in reality is a very open and welcoming city. Its multicultural population has given it a revived creative energy, with traditional French chefs experimenting with global cuisines, young designers following international trends but incorporating a certain French touch, and a new generation of musicians placing the French language into cosmopolitan sounds.
So a stroll through Paris is following the footsteps of artists, intellectuals, philosophers, and lovers... It's finding architectural gems, an enticing café or shop, and exquisite corners down Montmartre, Marais, Saint-Germain-des-Prés, or Bastille... In short, Paris is the beacon of sophistication and the joys of city life.

What to See and Do in Paris

Decide what you really want to see in Paris based on your interests -- whether that's art, architecture, street life or simply snapping a few photos by the main landmarks. We highlight the best attractions in different categories and, to help you plan, link you to their location on Google Maps () or to their official website or tour options ().

The Eiffel Tower was built to impress, hated when it was unveiled, and is admired by everyone today. The Triumphal Arch marks the center of the city and offers views from the top, while the domes of the Pantheon and of the Le Dôme des Invalides (the final resting place of Napoleon Bonaparte) both stand out in the city's skyline.

The Centre Pompidou's extraordinary inside-out building by architect Richard Rogers is home to the museum of modern art. It holds Matisse, Picasso, and other Cubist, Fauvist, and Surrealist works, while Picasso has the honors of having his own Picasso Museum. Having lived in France for most of his life, many of the Spanish-born artist's major works (such as his self-portrait or "The Kiss") are on display in a 17th-century mansion.
More recently, Cité de l'Architecture et du Patrimoine (the City of Architecture and Heritage) opened with the aspiration to be "the world's biggest architecture museum." Facing the Eiffel Tower in the Palais de Chaillot, it presents the history of architecture since the 12th century, but also promotes contemporary ideas.

The Louvre, the world's first and still most important museum, can take days to be seen properly. You'll likely be standing in line for some time before entering and getting close to its most famous piece, the Mona Lisa, but every effort is worth it. Its vast collection includes the best of European painting and sculpture, and ancient treasures from Asia, Egypt, Greece, and Rome.
But the Orsay Museum (housed in a splendid building that used to be a train station) also has a collection not to be missed. Each of its works (by Manet, Renoir, Degas, Van Gogh, among many others) is a masterpiece, and there is also a varied sculpture collection.

The Centre Pompidou (linked above) is the city's most striking building, but there are several other constructions in the city that stand as architectural wonders. The Arab World Institute is an example of that. It's a very modern construction but incorporating ancient Arabic motifs. Inside it exhibits a collection of Middle Eastern art and archaeological finds.
Another museum that would be worth a look for the architecture alone is the Quai Branley Museum. It's partly covered in wood and dense vegetation, while inside it showcases art from Africa, the Americas, Asia and Oceania.
More famous is the Sacre Coeur Basilica, a Romano-Byzantine construction standing above Paris for over a century, while the modern Great Arch of La Defense (in reality a hollowed cube), also provides panoramic views over the city. 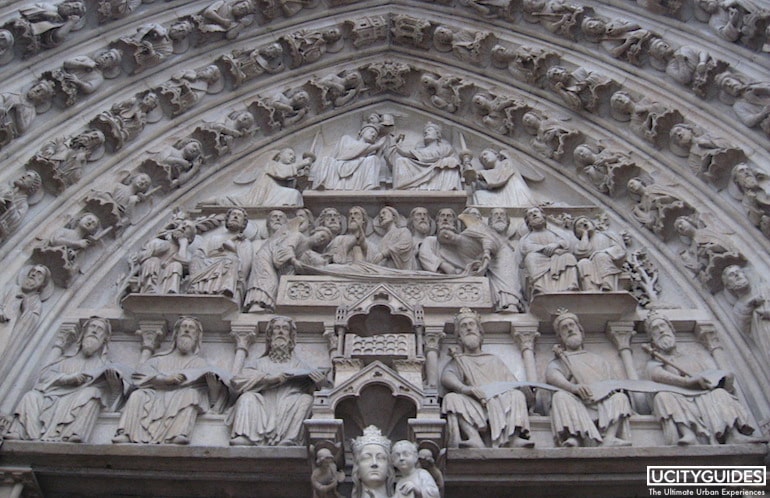 
The splendid Cluny (as formerly known) or Moyen Age Museum (the official name today) holds one of the world's most beautiful and unique medieval art collections, including Roman baths, tapestries, medieval stained glass, and exquisite gold crowns and jewelry.
Also considered a medieval masterpiece is the Sainte-Chapelle Church and its soaring stained-glass windows, while the Notre Dame stands as arguably the world's most famous cathedral (since a devastating fire in 2019 it no longer allows visitors inside, but you may still admire the spectacular Gothic façade with extraordinary architectural details, including iconic gargoyles on the north tower).

Start at the grandiose Place de la Concorde towards the Champs-Élysées, where every local and tourist goes for a stroll and window-shopping. From there, move on to the most glamorous shopping streets in the city, Rue de Rivoli, Saint-Honoré running parallel to it, and Avenue Montaigne not too far away. Follow that with a walk down Rue Montorgueil just outside Marais, the most elegant Paris district. Across the Seine is the lively St. Germain des Prés quarter and its historic cafés down Boulevard St. Germain.
Give your legs a break at the beautiful Luxembourg Garden, the city's most popular park.

Go on a tour of Paris and also take the train or go on an organized tour to Versailles Palace, only 40 minutes away. This 17th-century royal residence is the largest palace in Europe, and is surrounded by impressive formal gardens. The sumptuous interior includes the famous Hall of Mirrors where the Treaty of Versailles was signed, bringing WWII to an end. Find out about Versailles tours here: Tours of Versailles Palace

As home to the world's greatest fashion and design, Paris turns anyone into a shopaholic. Grand old department stores are big draws, while Avenue Montaigne and Rue du Faubourg Saint-Honoré display the latest luxury creations. In between, pass by traditional markets, wonderful antiques and bookshops, and quirky fashion boutiques.
The city is also known for its department stores, with the oldest being Le Bon Marché, partially designed by Gustave Eiffel. Even with fierce competition, it remains the hippest and most elegant of them all. Avant-garde and designer fashions (including a good selection of French lingerie) are the big sellers here, although it's the enormous food hall that gets the most attention.
Coming in at a close second in the grands magasins competition, Printemps has a good range of designer clothing and accessories, cosmetics, and home décor. Before you leave, ascend to the sixth floor for the tea room and its lovely Art Nouveau stained-glass cupola.
The youngest of the big three is Galeries Lafayette, opened in 1894. Topped by a fantastic dome of steel and glass, it's a temple of Paris style, housing the main fashion labels, including an extensive lingerie collection and fine jewelry. Also pass by the excellent food hall and the 7th-floor terrace for its city views over the Opera to the Eiffel Tower.

Going to a café is an essential part of Paris' social life. It was invented as the meeting place of artists, writers, and intellectuals, and many became institutions, remaining today as one of the city's best-known images.
The French capital was also the founder of haute cuisine, and star chefs Joël Robuchon, Guy Savoy, Alain Senderens, and Alain Ducasse turned their restaurants into destinations. But you don't have to splurge at the many Michelin-star restaurants in order to eat well in Paris. All over the city you'll find good options for all kinds of budgets and a variety of international cuisines.