The ultimate travel experiences in the Big Apple 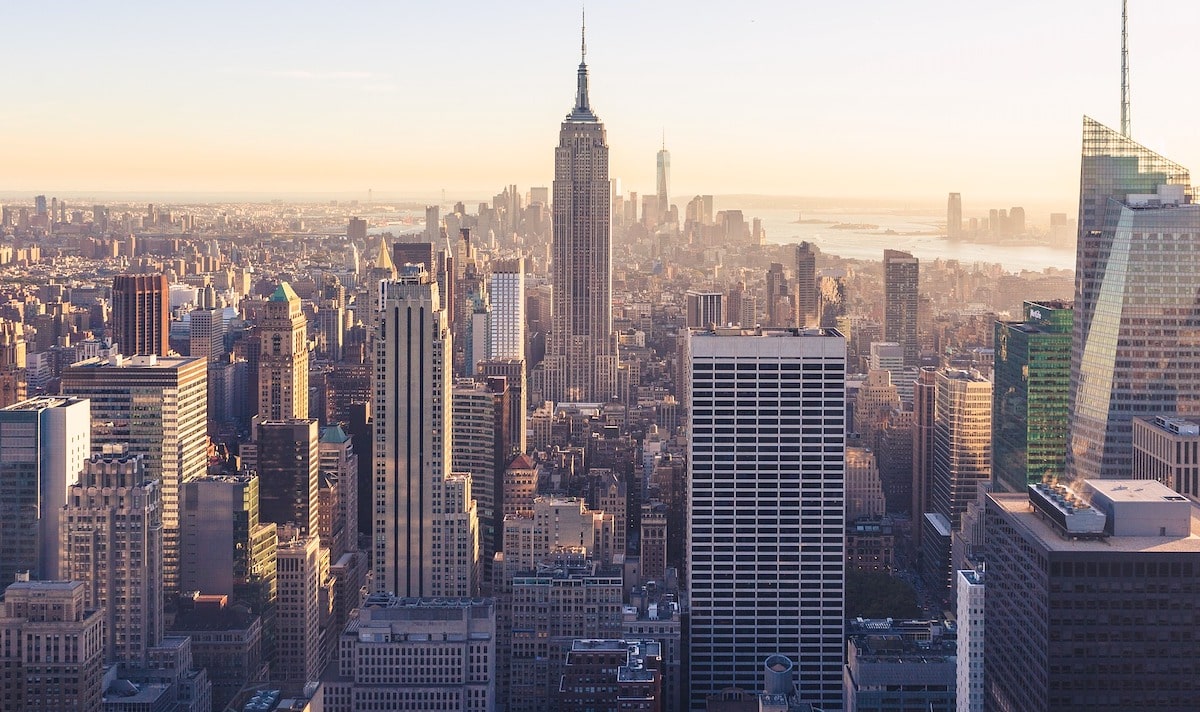 View of Manhattan and the Empire State Building


The Big Apple, Gotham, "the city that never sleeps," or however you want to call it, New York is uncontestedly the world's most exciting and vibrant city. It's the capital of the globalized world, and a microcosm of the planet -- a melting pot of cultures, styles, and flavors.
This is the world's urban epicenter and, in between its skyscrapers, down Broadway's bright lights, and past its several world-class museums, New York buzzes with activity. Alongside top-notch culture, entertainment, and glamour, is a cosmopolitan diversity in the multitude of locals and tourists always rushing somewhere.
But while it may all seem too frenetic or chaotic, it doesn't take long to fall for the spirit of New York. It's its inexhaustible energy that makes it a sensational city to be experienced over and over again.
New York doesn't follow trends, it sets them. New Yorkers turn shabby into chic, and enjoy the simple as much as the refined. They meet for brunch, socialize at a gallery, overdose on shopping, search for the next hottest neighborhood, or sip a cocktail at a rooftop bar, and end their day knowing that there is no other city like this one -- which is why every culture or lifestyle can feel at home here, and you will too.

What to See and Do in New York

Decide what you really want to see in New York based on your interests -- whether that's art, architecture, street life or simply snapping a few photos by the main landmarks. We highlight the best attractions in different categories and, to help you plan, link you to their location on Google Maps () or to their official website or tour options (). 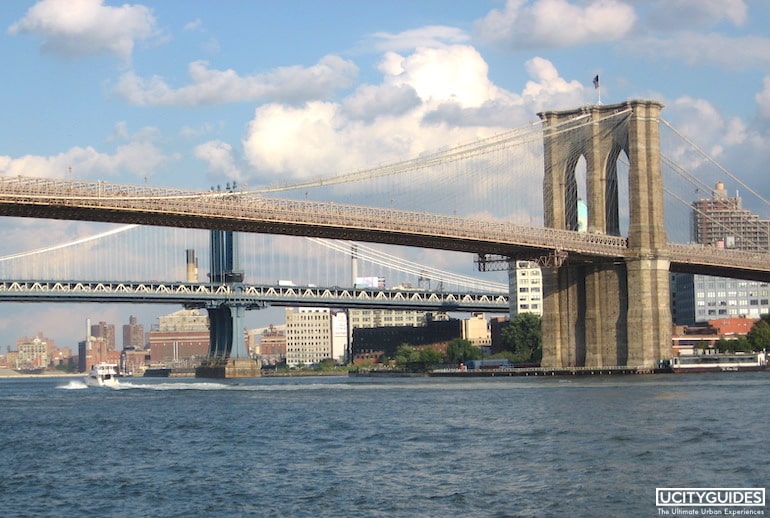 
Climb the Empire State Building for a King-Kong-view of the city, walk across Brooklyn Bridge, and take a ferry to Ellis Island and the Statue of Liberty for all of the city's postcard images.


Admire the world's most important modern art collection at the MoMA and stay for a meal at the fantastic restaurant overlooking the sculpture garden. Further uptown, the Guggenheim Museum's architecture and exhibitions are also not to be missed.
Also check out the Museum of Arts & Design facing Columbus Circle and Central Park. The permanent collection focuses on contemporary crafts in glass, clay, cloth, wood, and metal.

New York holds some of the world's top collections of classic art. There is the outstanding Metropolitan Museum (filled with Greek, Egyptian, Roman, and European treasures), the masterpieces of the Frick Collection, and the Morgan Library's extraordinary manuscripts, rare books, and prints.

In a city that pretty much invented modern urban architecture, it's difficult to pick only a few standouts. One of the first modern gems was the Chrysler Building, built in 1930 with a striking ornamentation at the top. But before that, the flamboyant Neo-Gothic Woolworth Building was already grabbing attention (and not just because it was the world's tallest structure for two decades), while more recent eye-catching additions to the skyline include Norman Foster's distinctive Hearst Tower and Frank Gehry's IAC Building.
Also check out the cutting-edge New Museum of Contemporary Art which looks like seven stories of piled-up silver boxes from outside, while indoors you'll find exhibitions focusing on emerging media.

Does such a relatively young city really have anything ancient? Yes it does, and it's ancient indeed -- stand under the dinosaurs in the enormous American Museum of Natural History and you'll be taken back to the Jurassic era (avoid the lines at the museum and get your Museum of Natural History tickets here). And despite being built in the 19th century, the beautiful St. Patrick's Cathedral would not have been out of place in medieval Europe. 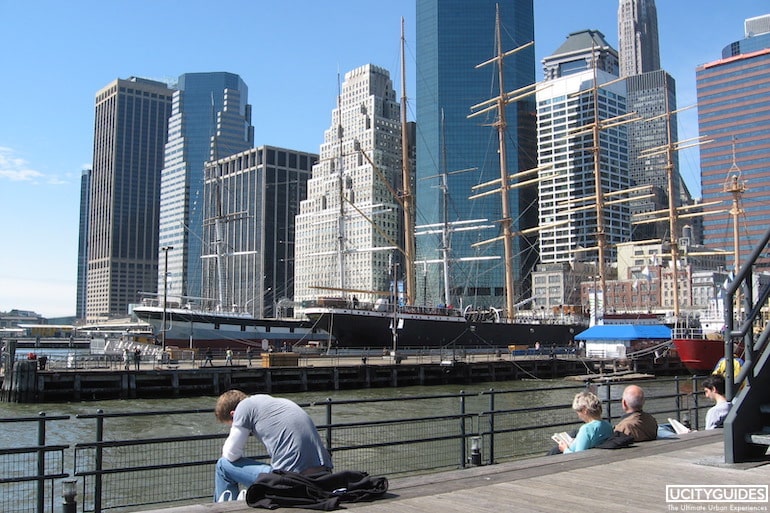 
It may be a tourist mecca, but a visit to historic South Street Seaport (with its shops, cafés, and restaurants) is a reminder of the city's past, surrounded by some of New York's oldest architecture (and the views of the city's bridges are not bad either).
But Manhattan is really all about life and walking around. A visit is not complete without a stroll through hip and trendy SoHo, passing by Greenwhich Village and Bleecker Street, and finally ending in Midtown's shopping paradise of 5th and Madison Avenue.
After all that, rest in Central Park, the city's green oasis where everyone comes to play, or head to a restaurant or bar at the hip Meatpacking District.
And we'd actually tell you to stay away from tourist hell Times Square, but we know you won't resist. So reserve that for the evening, when you'll be hypnotized by all of the billboards' neon lights, and perhaps be tempted by a spectacular Broadway show.

Any visitor to New York will include shopping in his or her itinerary. As the consumer capital of the world, it's a shopper's paradise, offering everything from high fashion to exotic foods. Whether you spend $5 or $5,000 is up to you, but we guarantee that it's in fact the shopping experience of a lifetime. From great department stores to designer boutiques, to gourmet shops, you can go for some major retail therapy seven days a week.
The department stores and major luxury labels are on Fifth Avenue and Madison Avenue (from 59th to 79th Street), while landmark Macy's (self-described as "the world's largest store") is on the corner of 34th Street and Broadway.
The more interesting independent boutiques are found in SoHo, where the younger and trendier New Yorkers prefer to shop, with most stores concentrated around Prince and Spring Street. Moving into Greenwich Village, walk down Bleecker Street for some quirky shops, and into the Meatpacking District for the hottest fashions.

You can taste all of the world's culinary specialties in New York. With around 13,000 restaurants, you won't go hungry in this city. You may start your day with a brunch at the cafés in SoHo, Greenwich Village, passing through trendy Bleecker Street and the Meatpacking District, which are also home to the hottest restaurants.
The fine dining and often Michelin-starred places are mostly found in Midtown, and the tourist-friendly chain restaurants are concentrated in and around Times Square.

There are all kinds of tours available in New York, but the most popular include those that go around the locations made famous through film and TV shows. A favorite continues to be the Sex and the City tour, which follows the footsteps of Carrie, Samantha, Charlotte and Miranda. Find out where you can see and experience their favorite spots here: Sex and the City's New York Hotspots 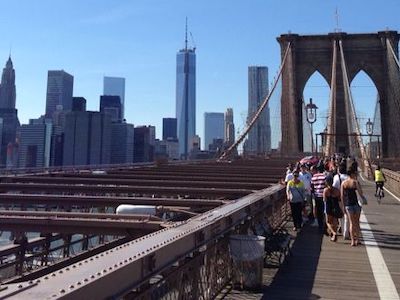