The ultimate travel experiences in Barcelona

View of Barcelona from the Palau Nacional - ©UCityGuides.com

Barcelona has achieved such an artistic and cultural refinement that it's become one of the world's greatest cities, despite the fact that it's not a national or international capital. It's become one of the coolest and most cosmopolitan cities on the planet, with its coastal zone and historical quarters offering trendy shopping, hip design cafés and restaurants, and cool nightspots mixed between architectural wonders.
Gaudi's fantastic architecture further seduces visitors and solidifies the city's image as an eccentric, energetic, creative, and stylish metropolis. It's a city that embraces all things new, a city that stays up late into the night, and a city with a discerning cuisine that's turned it into a top gastronomic destination.
It's that modern and innovative spirit that's placed Barcelona at the top of the urban travel world. It's very tourist-friendly, with its compact size making it possible to walk from its historical center to its Mediterranean beaches. Continuous waterfront developments complete the attractive, relaxing, and inviting atmosphere.

What to See and Do in Barcelona

Decide what you really want to see in Barcelona based on your interests -- whether that's art, architecture, beaches, street life or simply snapping a few photos by the main landmarks. We highlight the best attractions in different categories and, to help you plan, link you to their location on Google Maps () or to their official website or tour options ().

Gaudi's Sagrada Familia is an unfinished masterpiece, with cranes hanging above it for at least another five decades to come. Already completed is most of the façade, and you can also visit the interior containing the architect's tomb.
Passeig de Gràcia is another site known for its surreal architecture. The avenue's two icons, Gaudi's extraordinary Casa Batlló and Casa Milá (also nicknamed "La Pedrera") don't feature any straight lines and have remarkable façades with abstract shapes.

The Picasso Museum is one of Barcelona's most-visited attractions and is the best place to see many of the artist's earliest works. In addition to his paintings, there are also drawings and ceramics.
Joan Miró is the city's other famous artist, and the Miró Foundation is housed in a striking white building permanently presenting Miró's works together with periodic exhibitions of other artists.
Also worth checking out is the Contemporary Art Museum. Designed by Richard Meier, its white building holds a collection focusing on post-1945 Catalan and Spanish art mixed with some foreign works.

Parc Guell is yet another fantasy creation by Gaudi. Declared a World Heritage Site in 1984, it's made up of fountains, arcaded walkways, and a remarkable hall at the top of a grand staircase.
The newest landmark in the city is Torre Agbar, designed by Jean Nouvel. This steel and glass tower stands at 142 meters (465 feet), higher than the 130m-high (426 feet) Montjuic Communications Tower, a Santiago Calatrava creation for the city's 1992 Olympic Games.

Barcelona Cathedral is a magnificent Gothic building from the 14th century, although its spire is a 19th-century addition. The interior features some stunning Baroque altarpieces, medieval Catalan paintings, and a beautiful cloister.

Street performers welcome tourists to Las Ramblas, perhaps the most famous of all Spanish avenues. It's home to some monumental buildings which you can admire from one of the many cafés.
If the sun is shining, join everyone at Barceloneta beach.

Of all the Spanish cities, Barcelona is the best one for shopping. It offers original design shops like no other city in the country, with a large number of smart fashion boutiques and increasingly popular markets such as the architecturally-striking Mercat Santa Caterina.
Passeig de Gràcia is home to all the designer labels and upmarket stores, while the more unusual shops are found in the El Born area.
Be sure to also pass by La Boqueria, a lively market with stained-glass food stalls under a wrought-iron roof, where you can also have fresh seafood tapas for lunch.

Barcelona has been revolutionizing the culinary world for years, with creative chefs drawing gastronomic pilgrims from around the world to their restaurants. This means that while other big cities may offer an equally wide range of high-quality dining options, no where else will you find a more inventive cuisine. To match the excitement over the food, many places feature attractive interiors, further establishing Barcelona as one of the "must taste" cities of the world.

Go on a tour of Barcelona to see most of the city's sights in a short period of time, or take day trips to the nearby attractions. Sitges is a popular getaway, a small city by the sea that's often called "Ibiza in miniature." It's also known for its Carnival and as a major gay tourist town. 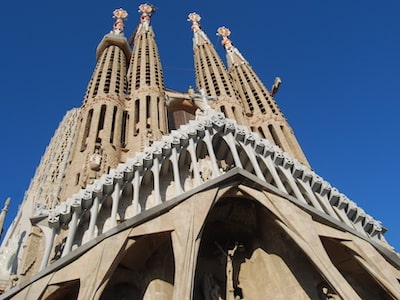