The ultimate travel experiences in the world's most beautiful city 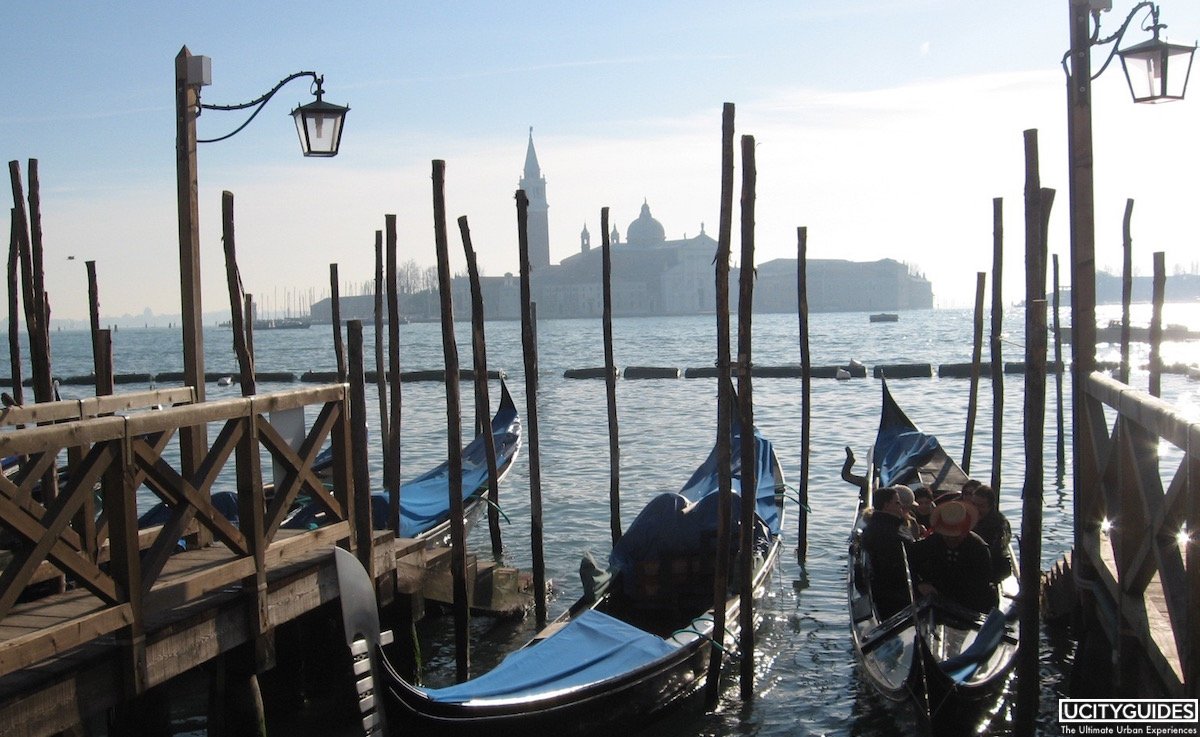 Venice, the city with no cars, just gondolas - ©UCityGuides.com


You'll find cities claiming to be "the Venice of the North," "the Venice of Africa," "the Venice of the East"... Any city crossed by canals or with colorful buildings sitting on the water's edge wants to be associated with the image of the world's most beautiful city. But the beauty of Italy's Venice is unrivalled, and the entire city is one work of art. It's also one of only a few cities in the world that can be described as truly unique, where main "streets" are canals, there are no cars or traffic jams, and the mixture of Renaissance, Byzantine, Gothic, and Baroque architecture leaves anyone wondering if this magical cityscape is real at all.
The fairytale or theatrical atmosphere is then enhanced by the carnival mask shops, romantic gondola rides, and colorful palazzos. Everywhere you turn is a postcard image of this unequalled urban masterpiece.
Nothing quite prepares you for Venice, even after seeing it a million times in tourist brochures, guidebooks, or films. You'll fall in love at first sight and will stand in awe of its architecture, piazzas, and canal views until the very last minute before you leave. You'll have the designer shops, sophisticated bars, classy restaurants, galleries, and other tempting attractions to go indoors, but nothing can prevent you from going back to standing by a canal admiring the most spectacular city ever created, over and over again.

What to See and Do in Venice

Decide what you really want to see in Venice based on your interests -- whether that's architecture, art, street life or simply snapping a few photos by the canals and main landmarks. We highlight the best attractions in different categories and, to help you plan, link you to their location on Google Maps () or to their official website (). 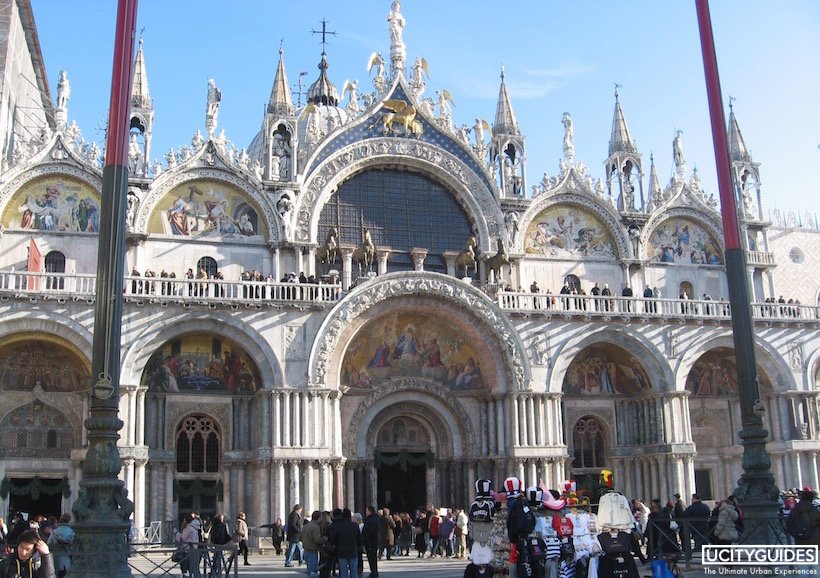 
Piazza San Marco is one of the world's most beautiful squares, and anyone standing before its famous Basilica di San Marco and the Palazzo Ducale won't disagree. Go inside those famous landmarks and pass by the Ponte dei Sospiri (Bridge of Sighs) behind the Palazzo Ducale, after going up the Campanile tower for city views.

Picasso, Pollock, Duchamp, Dali, Miró, and Magritte are just some of the artists represented at the Peggy Guggenheim Museum, with its contemporary art collection housed in a wonderful one-floor palazzo that served as Peggy's residence for three decades. Stay at the gardens for a while, admiring the sculptures scattered around.
If you enjoy that, you'll also want to pass by Palazzo Grassi, an 18th-century palace renovated in 2006 to display temporary art exhibitions around the stunning marble interior. 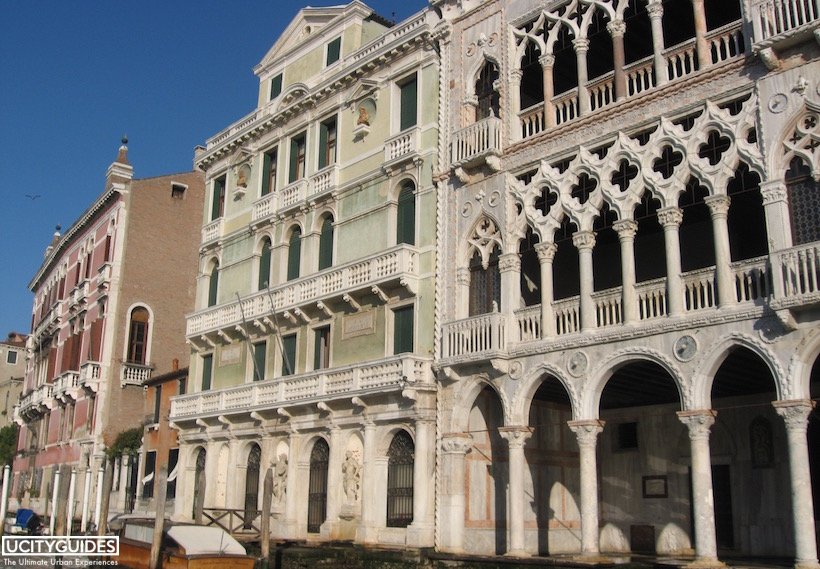 
If you only have time for one museum in Venice we'd recommend Peggy Guggenheim's (see above), but admirers of the Renaissance will prefer the Accademia Gallery. It's actually the city's most important museum, rich in religious art and offering a unique perspective on centuries of Venetian art. Also outstanding is the collection inside the Scuola Grande di San Rocco, with impressive works by Tintoretto.
More works by Venetian and other European artists are in the Galleria Giorgio Franchetti, inside an impressive architectural masterpiece, the Ca D'Oro. Even if you don't visit the museum, be sure to note the 15th-century palace's magnificent façade facing the Grand Canal.

Santa Maria Gloriosa dei Frari (or simply "Frari"), is a 15th-century Gothic church known for its interior decorated with masterpieces by Ticiano and Bellini, monumental tombs, and a fantastic wooden sculpture by Donatello. While this church is more impressive inside, Santa Maria della Salute is a grandiose baroque church best admired from outside, with its huge dome seen from almost anywhere on the Grand Canal. The interior is surprisingly somber, although it includes some notable 16th-century paintings.
To go further back in time, visit the island of Torcello, the oldest continuously populated region of Venice. Its 7th-century cathedral features some magnificent mosaics, and the adjacent church is a wonderful example of the Byzantine style. 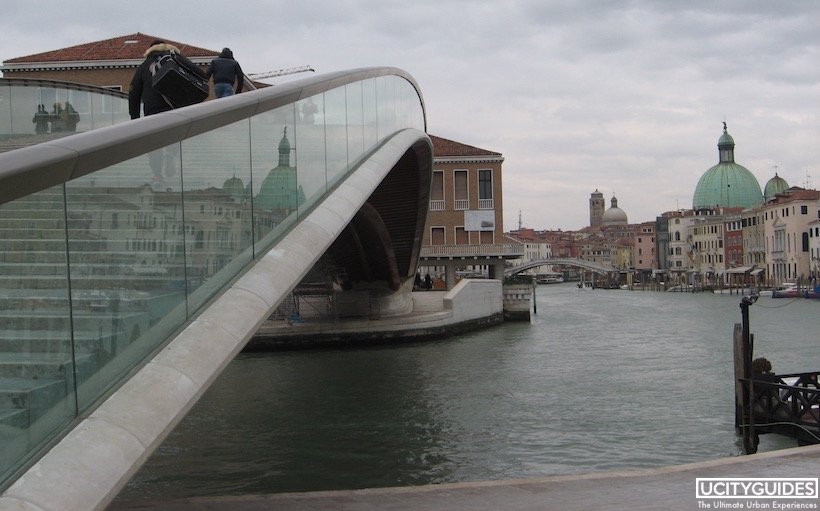 
Venice avoids contemporary architecture so much that its first brand-new construction in seven decades drew endless controversy. Santiago Calatrava's Constitution Bridge opened without a major ceremony in 2008 after protestors said it hid the city's skyline from Piazzale Roma (where you'll arrive in the city from the airport), was "a waste" of Venice's money, and lacked access for the disabled. You draw your own conclusions as you cross the 94-meter (310ft) glass arch. 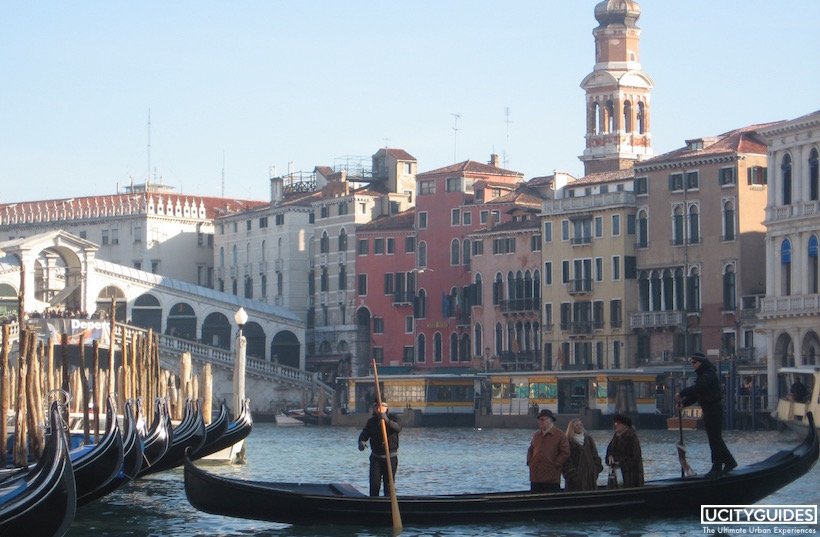 The Grand Canal and the Rialto Bridge - ©UCityGuides.com


Take a vaporetto (water bus) ride from outside the train station all the way to Piazza San Marco to admire all of the stunning architecture facing the Grand Canal. An even more romantic (although touristy) experience is a gondola ride through the city's canals and in between the decaying buildings.
As you walk around the city you'll see signs pointing in the direction of Rialto, a neighborhood known for its market and iconic bridge. Do as the Venetians, and start your day at the market, and return at night for the city's hippest hangouts located behind the bridge (look for Campo dell'Erbaria and Campo Cesare Battisti, two old squares by the canal). 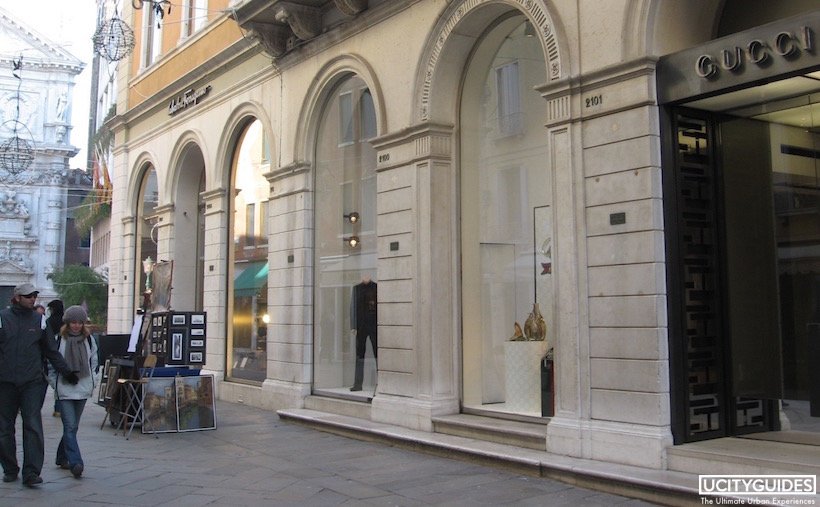 
Window-shop down Calle Larga XXII Marzo west of Piazza San Marco for all the big-name fashion labels you expect to find in any Italian city. Other upscale shops line the streets collectively known as the Mercerie, but note that prices in Venice are generally higher than in Rome or Florence. The best buys in the city are its crafts, especially glassware from Murano, lace from Burano, and the famous papier-mâché masks. There are so many shops selling those crafts, that many are of mass-produced low quality and very likely even made in China. To make sure it's an authentic Venetian item, look at the price. If it's an astronomical amount, it's likely to be the real thing. You'll need to take some time to look around and find the truly original pieces, with a trip to Murano being the best idea if you're really serious about special glassware.
You also can't leave Venice without visiting the bustling Rialto Market, taking place every morning from Monday to Saturday by the Rialto Bridge. You'll find Venetians buying their fresh fruits, vegetables, fish and a variety of cheeses. 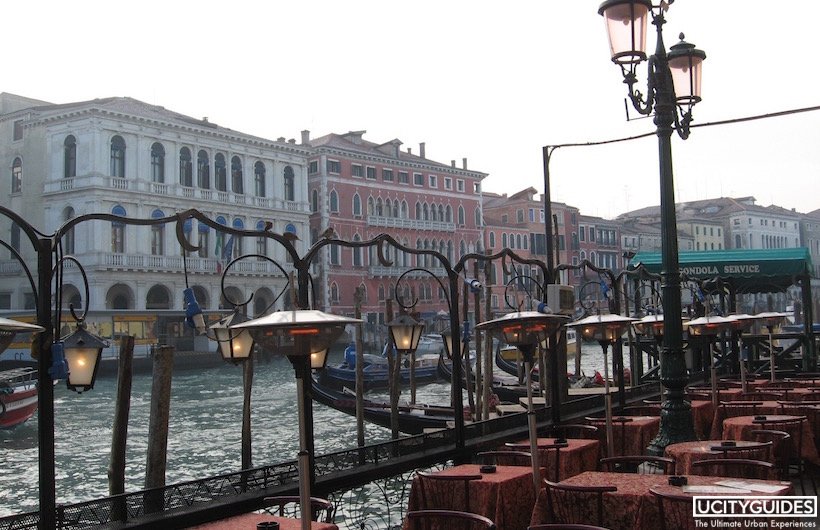 One of many restaurants by the Grand Canal - ©UCityGuides.com


After an obligatory stop at the classic, palatial cafés in and around Piazza San Marco, avoid the city's many touristy restaurants and find the ones serving some fine regional cuisine or more ambitious contemporary menus. Venice is a city where you really need to look for a more outstanding dining experience, usually found on the backstreets away from the grand canal.

Go on a walking tour, a gondola ride, a cruise or day trip:

Going outside the city and need a car?: 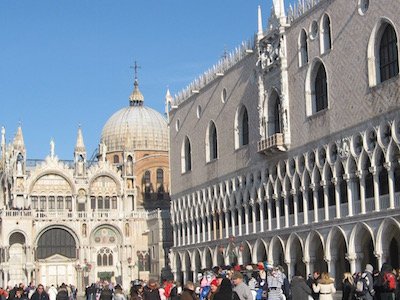