The main things you must see and do in New York

It hasn’t been the world’s tallest building in quite some time, but it remains the most famous skyscraper. Inaugurated in 1931, it has been featured in countless films and TV shows, and its outdoor observation deck on the 86th floor remains popular, offering breathtaking views of Manhattan.
Tickets: Empire State Building admission

A symbol of freedom, this colossal statue was unveiled in 1886, and welcomed immigrants to Ellis Island, the gateway to the United States from 1892 to 1954. It's reached by ferry from Manhattan, and the interior can be visited, although only 240 people per day are permitted to climb the staircase to the top. If you wish to be one of them, you have to book months in advance.
Tickets: Statue of Liberty admission
Official Website: www.nps.gov/stli 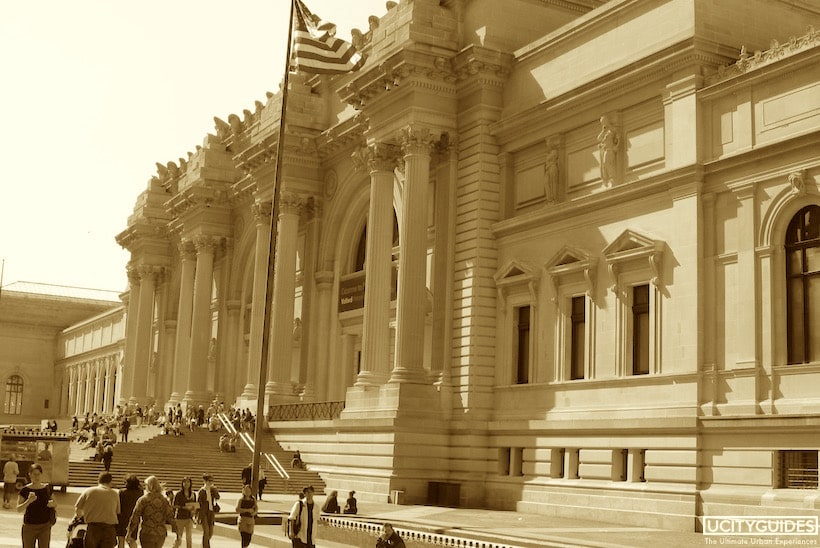 A mile-long stretch of 5th Avenue (between 82nd and 105th St.) has the world’s biggest concentration of culture. It's home to several museums, including the must-see Metropolitan Museum of Art (or simply “the Met”), the Solomon R. Guggenheim Museum, and the Cooper-Hewitt Museum. The Met is one of the world’s largest and most-visited museums, with a collection that goes from ancient Egypt to European masters; the Guggenheim is in a spiraling building designed by Frank Lloyd Wright and presents temporary exhibitions, mostly of modern art; and the Cooper-Hewitt contains one of the world’s largest design collections.
Tickets: The Met and Guggenheim Museum 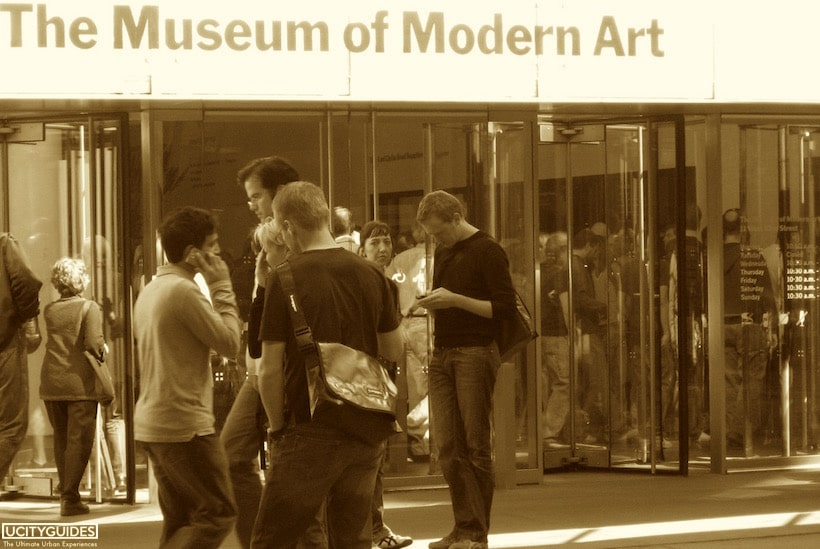 The world’s greatest modern art museum was founded in 1929 and presents compelling temporary exhibitions together with an extraordinary permanent collection. It’s where you can seen some of the greatest paintings by Salvador Dali, Picasso, Van Gogh, and other major artists, plus masterpieces of photography, film and design.
Tickets: MoMA admission
Official Website: www.moma.org 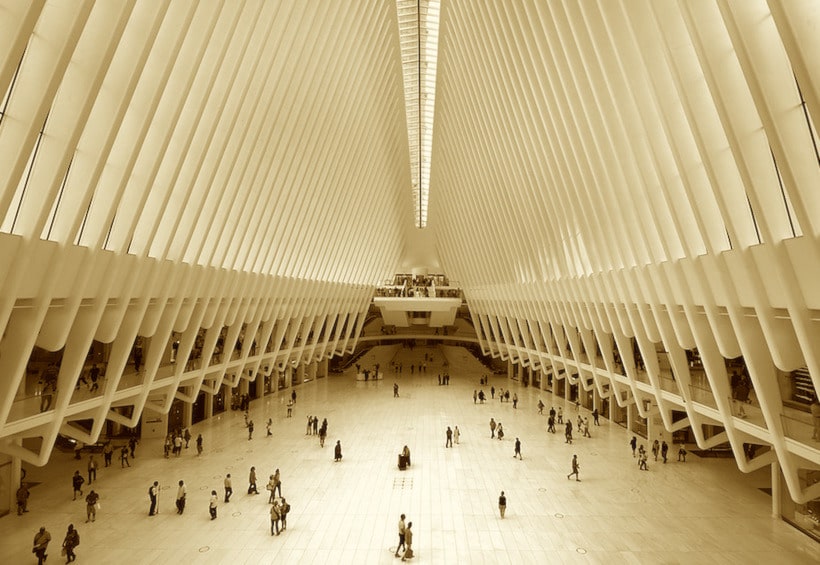 The site of the landmark Twin Towers that were destroyed in the September 11 attacks is now a tribute to the victims of the event, and where you find the One World Trade Center Tower (shortened to One WTC and also known as Freedom Tower). Inaugurated in 2014, it’s the tallest building in the United States and in the Western Hemisphere, and features an observation deck at the top, the One World Observatory. The National September 11 Memorial and Museum is right below, and was inaugurated on the 10th anniversary of the tragedy. It addition to commemorating the lives of every victim, it tells the story of 9/11 through multimedia displays and artifacts.
Tickets: One World Observatory and September 11 Memorial and Museum 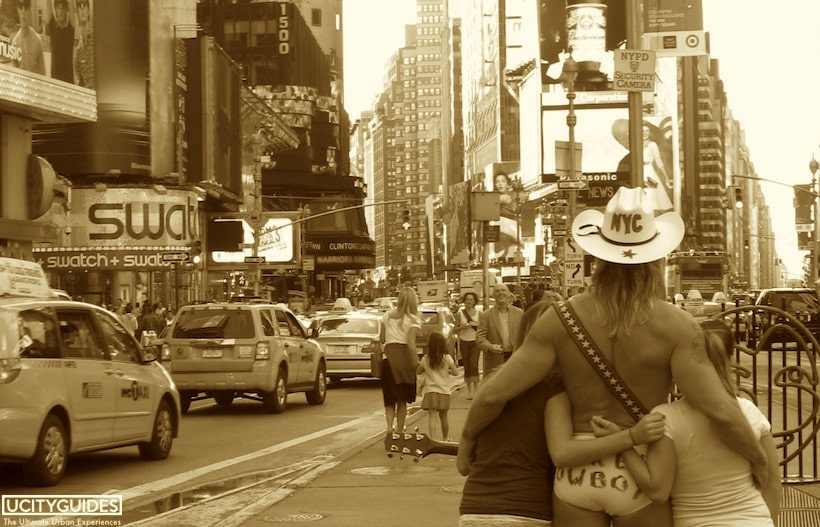 Named after the New York Times tower in 1904, this vibrant square is essentially an entertainment center. Its neons and bright billboards are tourist magnets, especially at night. It's also the heart of the Broadway Theater District, home to most of the city’s theaters and their famous musicals, which are a quintessential New York experience.
Locate it on the map: Times Square 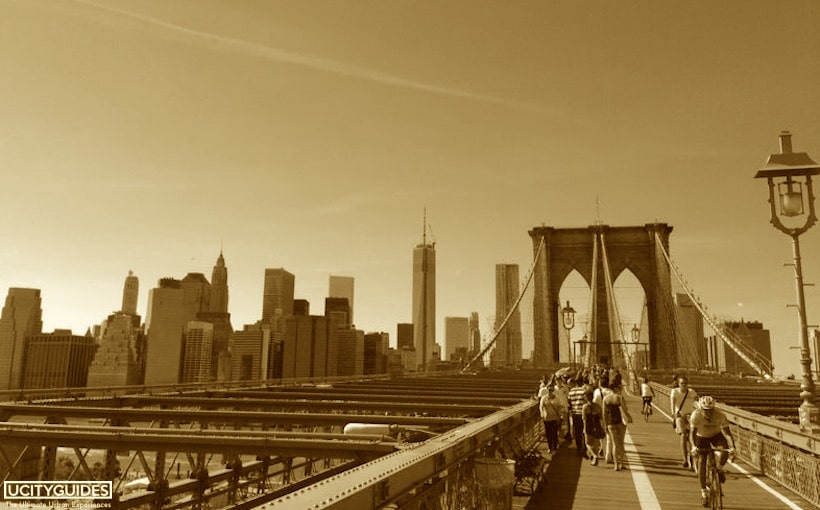 The world’s first steel bridge was completed in 1883 in order to link Manhattan and Brooklyn. It includes an elevated walkway for pedestrians, where you can admire a view of Manhattan’s skyline. Below the bridge is South Street Seaport, which offers more views (including the best ones of the bridge) and a number of shops and restaurants.
Official Website: www.seaportdistrict.nyc
Locate it on the map: Brooklyn Bridge

Created in 1858, this huge park has lakes, playgrounds, skating rinks, romantic bridges, fountains and statues. One of the most visited sites is Strawberry Fields, created in memory of John Lennon, who lived nearby, with a Portuguese-style cobblestone mosaic inscribed with the word “Imagine” that was a gift from the city of Naples, Italy. The biggest attractions are found between 59th and 79th streets, and there are city views from several spots. The buildings facing it on Central Park West are home to many celebrities, and feature some interesting architectural (mainly Art Deco) details.
Tours: Central Park Tours
Official Website: www.centralparknyc.org 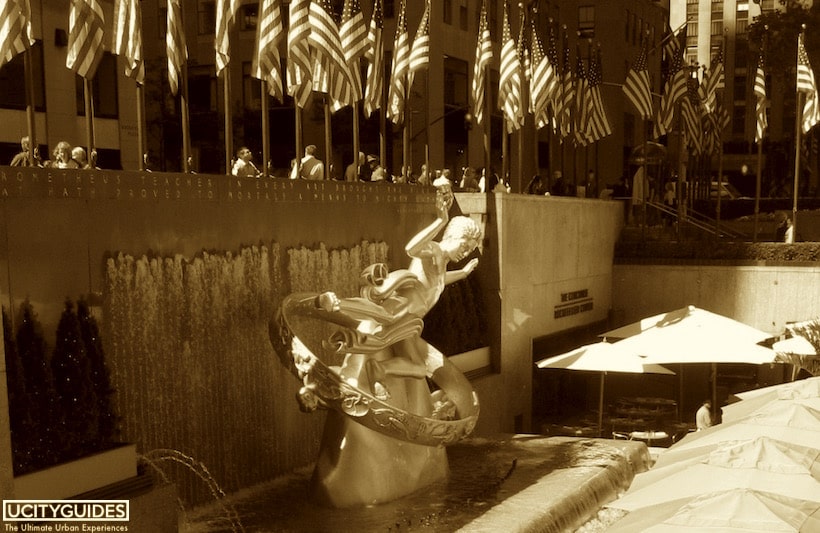 This world-famous complex mixing offices, shops, restaurants and an iconic ice rink, is the site of the 30 Rockefeller Plaza building, which rivals with the Empire State Building as the attraction with the best bird’s-eye views of New York. From its “Top of the Rock” observation deck you can look out to the Empire State Building and look over Central Park and all the other major landmarks nearby. Across the street is St. Patrick’s Cathedral, the largest Catholic cathedral in the country, built in 1878 in a magnificent Neo-Gothic style.
Tickets: Top of the Rock
Official Website: www.rockefellercenter.com 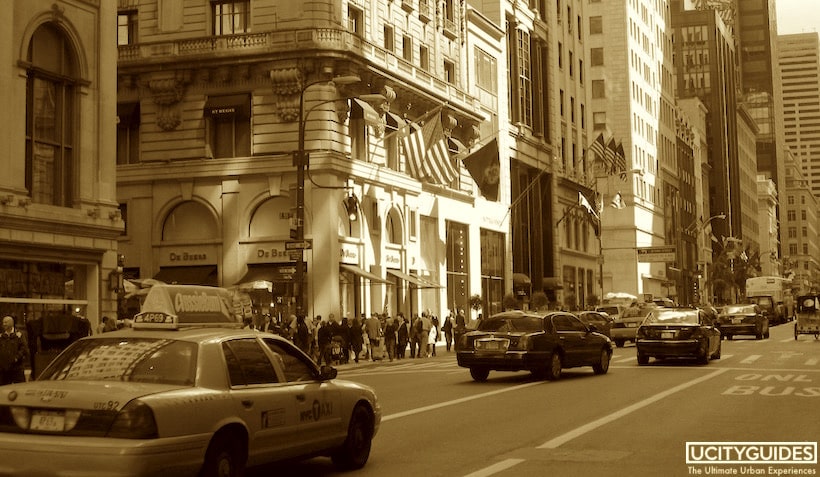 Stretching from Greenwich Village to Harlem, Fifth Avenue runs through most of Manhattan and is one of the world’s grandest and most expensive boulevards. Part of it is the Museum Mile (see above), but it’s mostly known as a shopping destination. It has most of the city’s department stores, luxury labels, and a number of historic landmarks, like the New York Public Library, the Flatiron Building, and the must-see St. Patrick’s Cathedral and Rockefeller Center.
Locate it on the map: Fifth Ave. 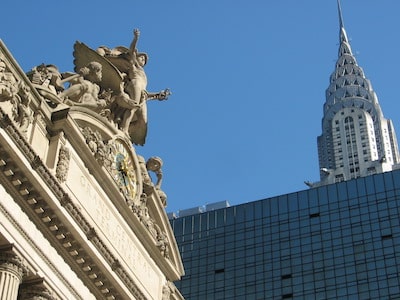