How to get to and from the airports, and getting around the city on public transportation 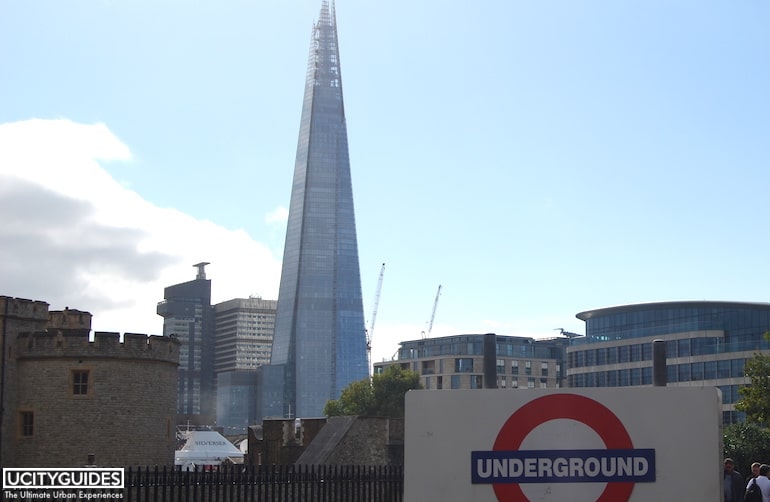 London Underground and view of The Shard - ©UCityGuides.com

London has eight airports, although you'll be landing at one of the five major ones -- Heathrow, Gatwick, Stansted, Luton, and London City. Heathrow is the world's busiest for international traffic and the main hub of British Airways. Gatwick gets similar European and inter-continental traffic, while Standsted and Luton cater to the low-cost short-haul flights. London City is the smallest of all and focuses on business travelers, including considerable business jet traffic.
To reach the center of London from Heathrow take the non-stop Heathrow Express train to Paddington Station (taking about 15 minutes) or the underground (for a 40-50 minute journey). From Gatwick take the rail service to Victoria Station, and from Standsted take the train to Liverpool Street Station. If you're landing in Luton, take a shuttle bus to the airport's Parkway Station (taking about 10 minutes), where you can then take a train to the city. From London City Airport take the DLR (Docklands Light Railway) that links easily with the underground.
You may also prebook the following transfer services:

Transfers from the Airport

If you don't wish to rely on public transportation and prefer the convenience of a transfer, here are your options:

Once in the city, the fastest and easiest way to get around is by taking the Underground (also called the Tube). After that service stops running at 12:30am (10:30 on Sundays), you must rely on taxis which are comfortable but expensive.

To go elsewhere in the UK by car, check the cheapest rental rates: