The gay guide to Lisbon


There aren't many rainbow flags waving around Lisbon's seven hills, and, due to their quiet residential neighborhood locations, you must ring a bell to enter a few late-night gay bars. While this picture may take you back into the so-last-century days of the closet, you should not be fooled -- Lisbon is very gay.
Yes, Lisbon is the capital of a country with a strong Catholic culture that lived under a homophobic dictatorship for decades, but the city has become more open, colorful, and quite gay in the last decade (gay marriage and adoption is legal). Many gay Portuguese men are still married-with-children, straight men seem way too obsessed with affirming their masculinity with macho speech and attitudes, while others maintain ambiguous Batman-and-Robin relationships, but let's just come out and say it -- Lisbon is one of Europe's most attractive gay destinations.

Right in the heart of the neighborhood of Príncipe Real, in the square and garden of the same name, you'll find a memorial to the victims of homophobia. It was unveiled in 2017 and represents two humans figures (a male and a female) stepping out of a closet.
Locate it on the map: Príncipe Real Garden - Gay Memorial

Lisbon's summers are long, so you'll likely be drawn to the beach (it can be pleasant and warm enough as early as April, all the way to mid-October!). South of the city, on the coast by the town of Costa da Caparica, you’ll find a rather wild beach that’s become a popular gay destination. Known as Praia 19 (“Beach 19“) for being the 19th stop of a small tourist train that departs from Costa da Caparica, it’s backed by cruisy dunes. It's better reached by car, but it's not impossible to go by public transportation (see the Lisbon Gay Beach 19 Guide ).

If you happen to be in the city in June, there is the usual gay pride march and related events. In September, be sure to catch Queer Lisboa, the Lisbon Gay and Lesbian Film Festival, one of the largest in Europe, screening over 100 gay-themed films from around the world.

One of the oldest gay bars in the city, it’s known for its Sunday-night “message party.” Everyone’s given a number as they enter the small space, and waits for someone to leave a message for it, in the hopes to connect with a new friend or lover.
Facebook Page: Bar106

This bar is a meeting point for bears, but as the only gay bar in town with outdoor seating, it also attracts other LGBT cultures. Beer is the most popular drink, and pop hits from the 90s to today the most popular tunes.
Facebook Page: TR3SLisboa

Opening earlier than other gay bars (at 6pm), it’s found in the heart of the Príncipe Real district and offers pre-dinner happy hours. Although the bear community is the target, it welcomes everyone with a relaxed atmosphere, snacks and DJs on weekends.
Facebook Page: shelterbarlisboa

For post-dinner drinks, the entire city invades the narrow streets of boho Bairro Alto, with the corner of Travessa da Espera and Rua da Barroca at one point being dubbed "the pink corner." While most gays have now moved elsewhere, that’s where you still find this small bar, which still attracts the LGBT crowds.
Facebook Page: side.bairroalto

Before moving to the clubs in Príncipe Real, the gay boys pass by this straight-friendly bar in Bairro Alto. It serves cheap beer and plays loud pop and Latin beats.
Facebook Page: burlesqueclublisbon

The first (and still biggest) gay club in the city consists of two dance floors -- one playing house; the other well-known pop sounds and the occasional gay anthem.
Facebook Page: TrumpsLisboa

Located just down the hill from Príncipe Real, by the Parliament building, this club hosts theme parties every Friday and Saturday night, and plays the hits of gay divas to a young, fun-loving crowd.
Facebook Page: poshclublisbon

The only place in town where you can catch a drag show is still going strong after four decades. It’s also one of the few spots open on Mondays, when it gives the stage to aspiring drag queens.
Facebook Page: FinalmenteClub

When things die down in Bairro Alto by 2 or 3AM, the real clubbing is about to get started. One of the immediate choices is Lux, the city's most fashionable club, which seems to always reserve a section of its dance floor for alternative lifestyles.
Website: www.luxfragil.com

When one of the city’s oldest gay bars closed, it became this cruising club which has a special theme for every day of the week. It also has a store, selling sexy underwear, sportswear and toys for the boys.
Website: www.barcru.net

A naked staff welcomes you to this club divided into private cabins, dark room, chill-out area, sling, showers, and a shop for all your fetishes.
Website: www.drako.club

This clean and modern sauna is located in Bairro Alto, close to the gay bars. There’s a jacuzzi, a steam room, a dark room, and massages.
Website: www.trombetabath.com

This hetero-friendly sauna welcomes all genders and sexual orientations, but most of the clients are gay men. Services include Turkish bath, dark room, and glory holes.
Website: www.saunapolo56.pt

Gay men are now the majority, but this is where lesbians traditionally have gotten together for drinks and some dancing on the small dance floor. You’ll find that most people tend to grab a drink at the bar and head outside, to enjoy it by the distinctive orange doors.
Facebook Page: purexclub 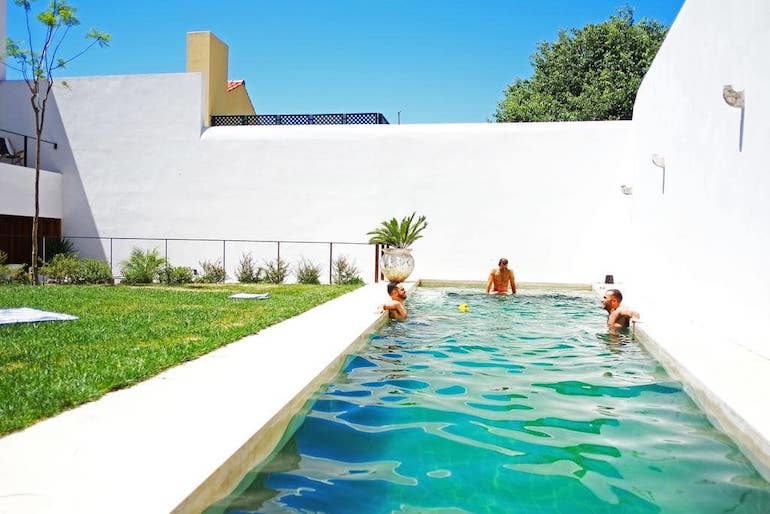 When the sun sets, you may shower and relax at this gay hotel on a quiet street in the nightlife quarter of Bairro Alto. After a gay night out, you may dive into the small outdoor pool and sunbathe at the garden. 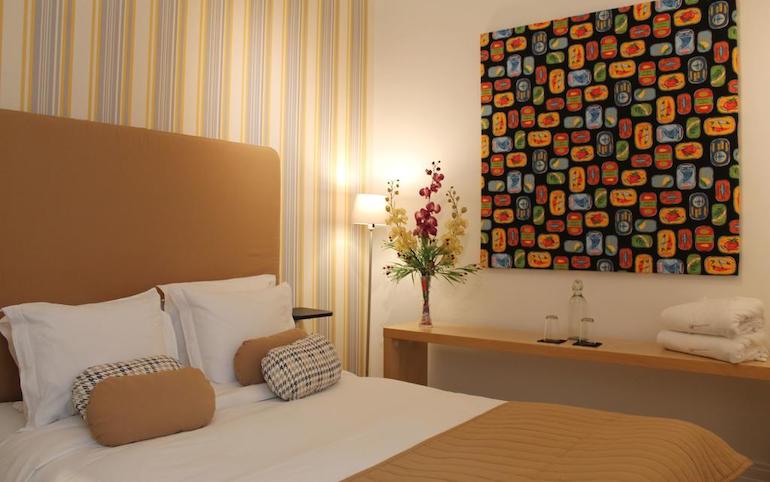 A renovation in 2017 gave this gay guesthouse a new colorful and contemporary interior. There are just four rooms with a shared bathroom, plus a dorm with three bunk beds. Although it’s centrally-located, it can pick you up at the airport and suggest guided tours. It serves breakfast until late, and is a good option if you’re on a budget. 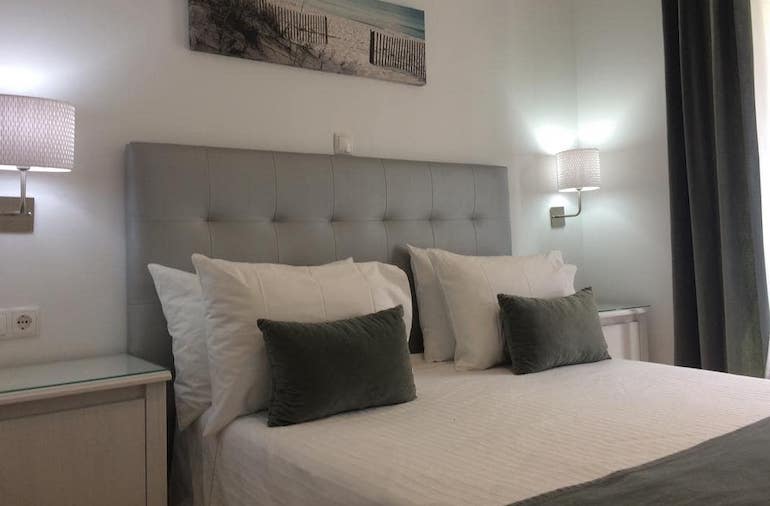 The city’s first hotel to declare itself gay-friendly, it has been renovated with a more modern décor. The charming, tiled building is located just a short walk from the gay bars in Bairro Alto and Príncipe Real. 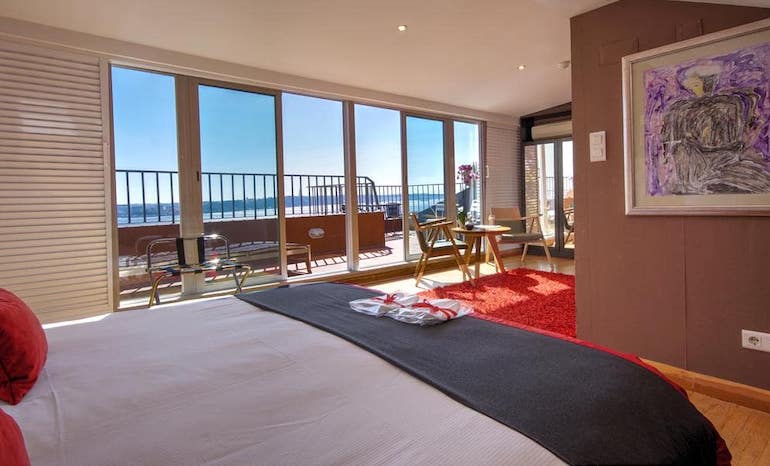 Located up on a hill by the castle, this romantic gay-friendly hotel welcomes gay couples with art-filled rooms. Some of them offer beautiful panoramic views of Lisbon, and are the perfect place to wake up with a special someone. 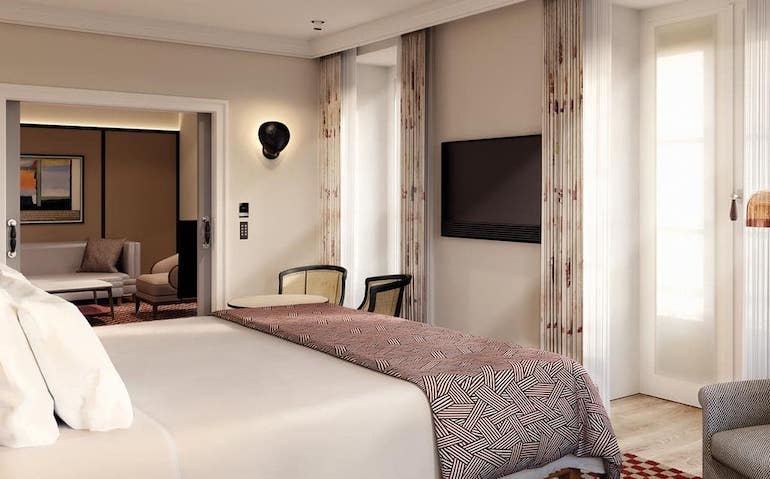 This trendy boutique hotel is a luxurious gay-friendly option. It has a popular rooftop terrace with a river view, a sophisticated restaurant, and a wellness center complete with gym, sauna, sensorial shower and treatment rooms.

Look for the hotel or apartment that best matches your budget, type of trip or personality. You may guarantee your reservation but do NOT pay anything at the time of booking. Payments are only made at the property, and there are no booking fees. Most hotels and apartments allow cancellations with no penalty if done up to 24 or 48 hours in advance. You'll see that information at the time of booking and again in the confirmation email:
Search for Lisbon hotels or Lisbon apartments 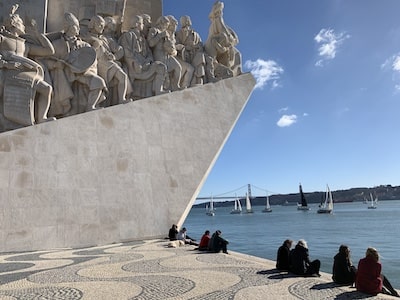 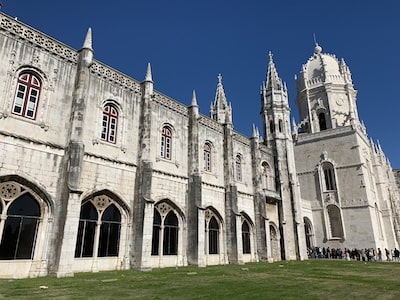