It's the urban trend of the last decade -- the rooftop bar. But when competition is fierce, you need to offer more than views and cocktails. So here come the pools to turn the settings even more dramatic. They're found mostly in densely-populated cities with no beach, but oceanfront cities like Rio de Janeiro and Barcelona now have them too. Who needs the beach when you can swim and sunbathe while admiring some of the world's most stunning cityscapes? Naturally, these sky-high pools are part of hotels, offering guests the ultimate urban oases, that are reasons enough to travel to their great metropolises. 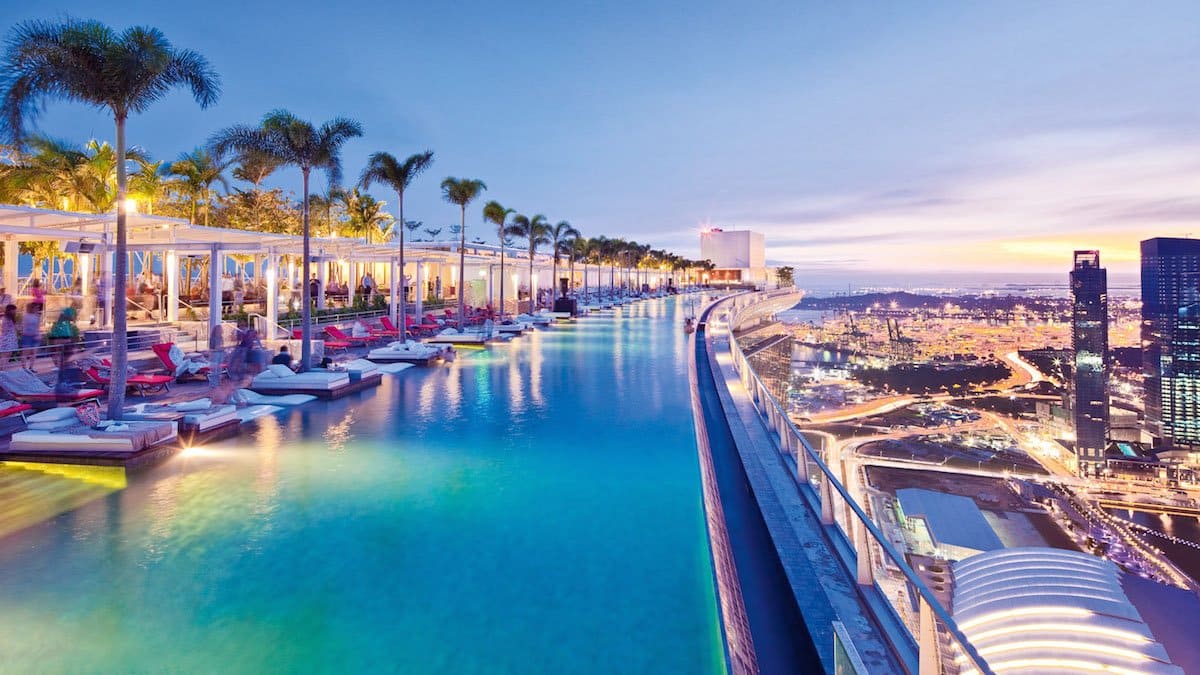 The world's most stunning pool stands at 650 feet in the air, up 55 floors, overlooking Singapore. Large enough to fit three football fields, it claims to be the biggest rooftop pool in the world, and needs three skyscrapers to hold it up. Unfortunately only guests of the Marina Bay Sands can enjoy it. 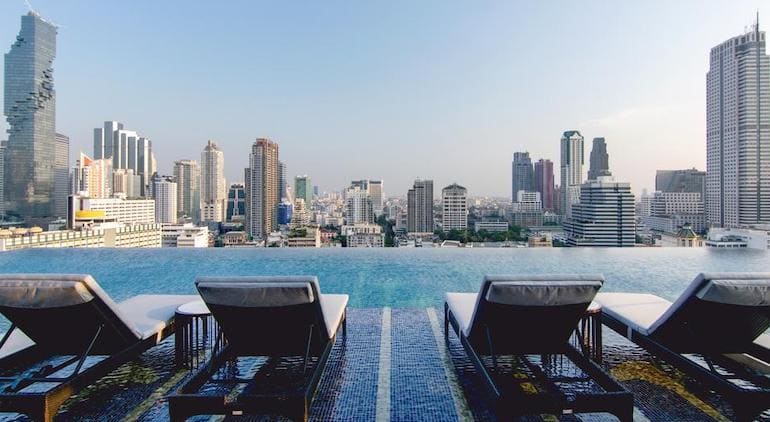 Bangkok is the city of rooftop bars but also has some of the world’s tallest and most breathtaking rooftop pools. The one to head to is the infinity pool at the top of the Bangkok Marriott The Surawongse, which looks directly across the city and to one of its most iconic landmarks, the King Power Mahanakhon Tower.
See the Bangkok Tourism Guide 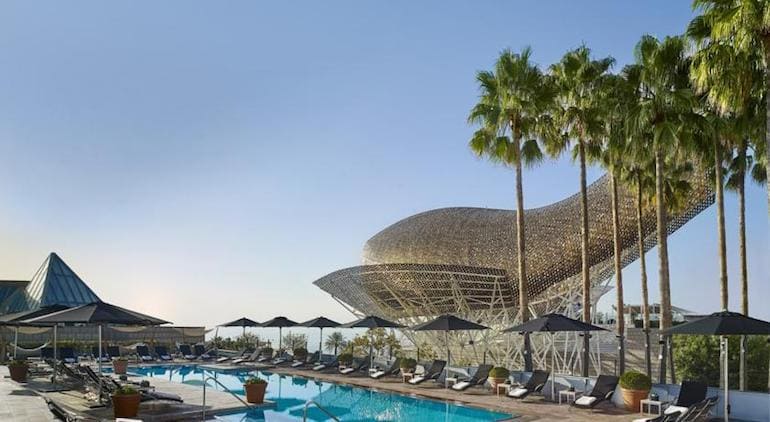 A 44-story tower on Barcelona's beachfront is the Hotel Arts Barcelona, which stands out for more than its striking architecture. It also has one of the world's top rooftop pools, next to an iconic Frank Gehry-designed sculpture.
See the Barcelona City Guide 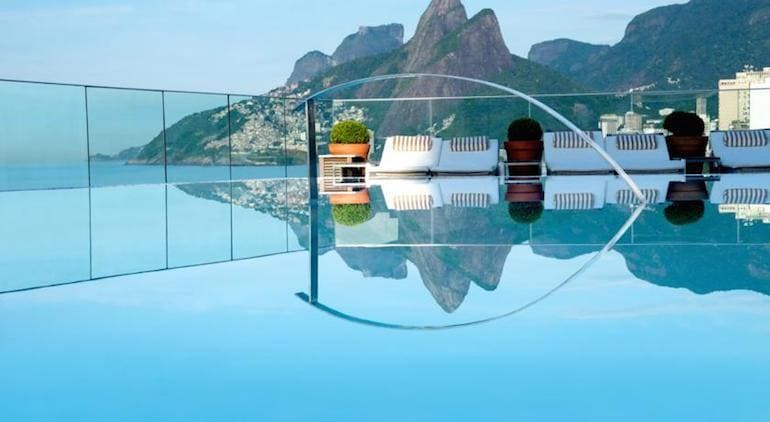 Sure, Rio has some of the world's most famous beaches, but an alternative to Copacabana and Ipanema is this rooftop pool designed by Philippe Starck at the top of Hotel Fasano. Naturally, it's an exclusive spot, having attracted celebrities like Madonna and P. Diddy, who lounged with the scenery of one of the most beautiful cities as a backdrop.
See the Rio de Janeiro City Guide 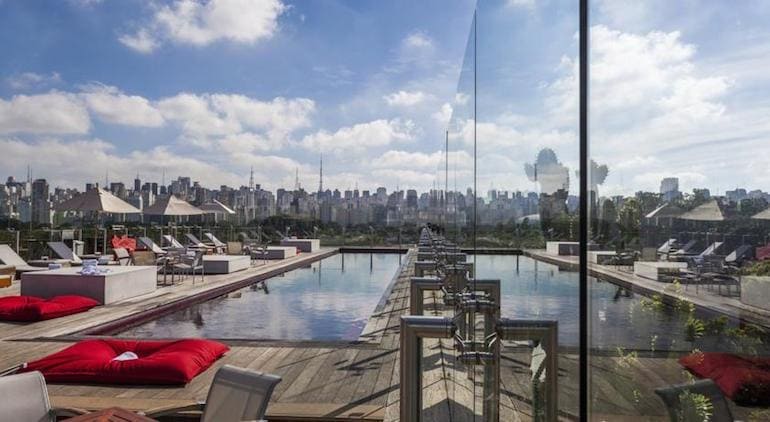 The first time we visited Hotel Unique, it was New Year's Day, and although that's in the summer season in Brazil, there was no one in the pool. But it's there more as part of the décor than for actually swimming. It reflects the city's skyline, and it's at night that you'll see it at its most stunning, as it's carefully lit. Those who want to dive in, will enjoy the underwater sound system.
See the São Paulo City Guide 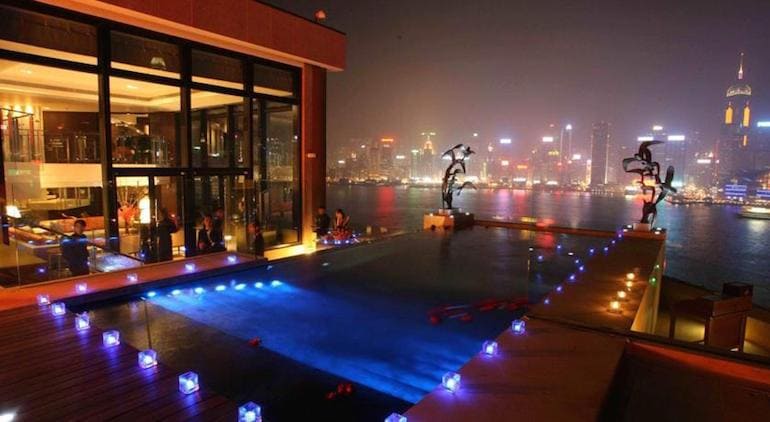 At first sight, your first words will be "wow!," and that's just for the view of Victoria Harbour. Because you'll be speechless with the sight of the pool. It's actually a collection of three on a terrace, with controlled temperatures -- hot, warm, and cold. You may book it here: InterContinental Hong Kong

Think Canadian weather isn't inviting for rooftop pools? You'll think again when you see this one in Toronto's 1 Hotel. Found on the 16th floor since 2010 (when it was still known as the Thompson Hotel), it's an infinity pool overlooking the city which becomes a real hotspot during the warmer months.

Barcelona doesn't have one but two of the world's greatest rooftop pools. The one at the Grand Central Hotel is not on the waterfront, but in the central Gothic Quarter. Guests swim above the city's landmarks, in a building that combines Old World charm with modern design.
See the Barcelona City Guide 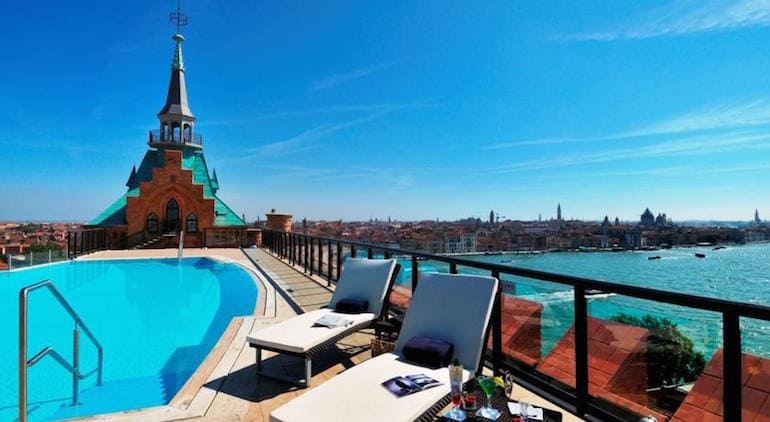 Going down the canals on a gondola is not the only aquatic pleasure you can have in Venice. You can also swim above the city, at the stunning rooftop pool of the Molino Stucky Hilton, which offers breathtaking panoramic views of the splendorous city at 115 feet above sea level.
See the Venice City Guide 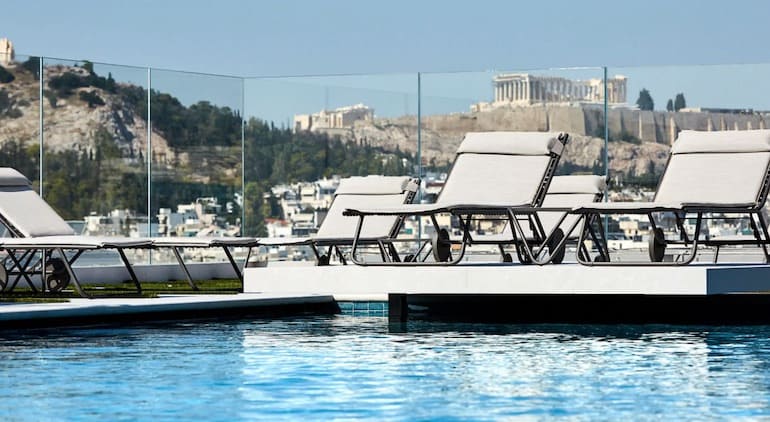 Athens' Grand Hyatt Hotel isn’t in a very central location (it’s about a 20-minute walk from the tourist areas), but its rooftop pool offers a 360-degree view of the city and of one of the world’s greatest wonders, the Parthenon on the Acropolis. It’s perfect for Athens’ often-scorching summer days, and to admire the ancient monument illuminated at night.
See the Athens City Guide